Eighty-year-old Ms. Skinner died this date, January 26th, in 1848 and was buried at Bethel Burying Ground. 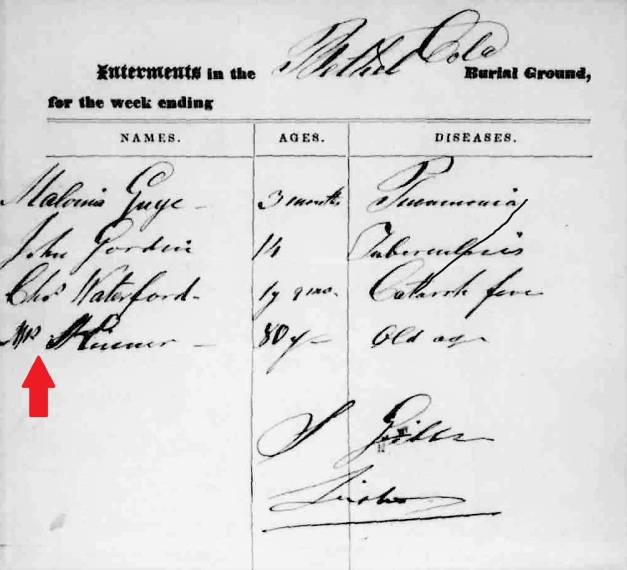 Eighty-year-old Ms. Skinner died this date, January 26th, in 1848 of “old age” and was buried at Bethel Burying Ground. Both original documents (above) related to her death and burial omit her first name for some unknown reason. However, I believe that the document below from the 1847 Philadelphia African American Census represents Ms. Skinner. Amazingly, there is no first name recorded on this document either.*

Ms. Skinner lived in a small 8’x8′ room at #5 Miles’ Alley for which she paid $1.75 a month for rent. She reported that she owned personal property worth $10. It is hard to explain why Ms. Skinner reported herself as “in service.” It may be that she had previously been employed as an indentured domestic worker. The census worker went on to report that Ms. Skinner regularly attended religious services and, despite being poor, Ms. Skinner’s small home was tidy and she was thought of as “respectable.” 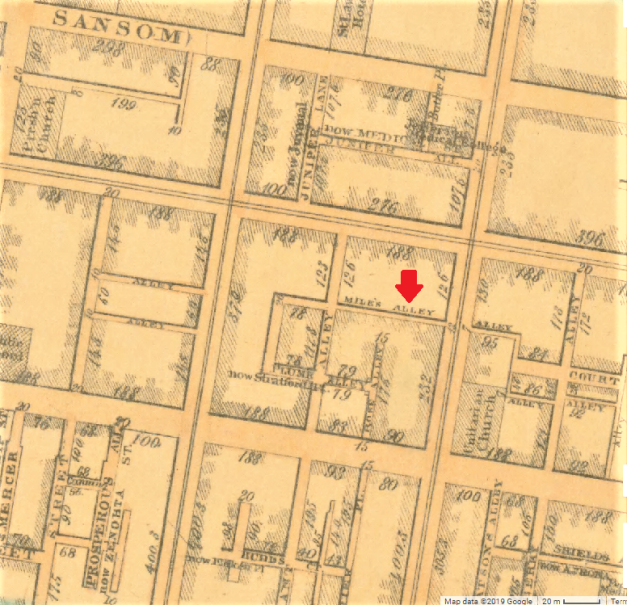 Ms. Skinner was buried at Bethel Burying Ground on a late January day that was “overcast, damp, and partly foggy with light rain occasionally falling.”

In a letter to The Philadelphia Register in 1829, a white man describes a funeral procession and burial at Bethel Burying Ground of an unnamed Black man who was employed as a woodsawyer. The procession was led by the deceased’s professional society.

“The society walked by the grave and were followed by many whose dress was comfortable, and whose appearance was neat. When we entered the burial ground of Bethel church, they commenced singing a hymn appropriate to the occasion, which was continued round the grave and had a very solemn and impressive effect. When it was finished the preacher (a “coloured” man) delivered a discourse. . . One sentence I particularly remember: ‘The greatest text is an open sepulcher, and the loudest voice that can be addressed to you will soon be heard on the boards of the coffin.’ “(The Philadelphia Register and National Recorder, vol. 1; January to June 1819, p. 84-85.)

*Searching through city directories and local and federal censuses, the name of a ‘Barbara Skinner’ appears. Although possible, there presently is not enough evidence to state that is our Ms. Skinner.