The two-year-old son of Sarah Marshall died this date, November twenty-fifth, in 1848 and was buried at Bethel Burying Ground.

The two-year-old son of Sarah Marshall died this date, November 25th, in 1848 of Tuberculosis and was buried at Bethel Burying Ground. Ms. Marshall was a single mother working as a laundress residing at 10 Pleasant Avenue with a female child whose age was between six and fourteen years of age, according to the 1847 Philadelphia African American Census. This Census reports the younger child as a female, whereas the attending physician states that the child was a “son.” It appears that neither Dr. Lehman nor the manager of the cemetery was very familiar with the family as evidenced by the “Cemetery Return” (see below) filled out by the Bethel Church sexton Shephard Gibbs. 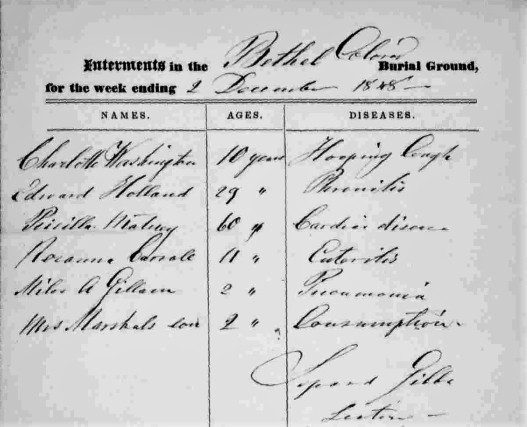 Ms. Marshall lived in crushing poverty and received assistance from an aid organization in the form of firewood for her stove. In a good week, she likely earned $2-$3 and she paid $3.50 a month for a 10’x10′ room. Despite her situation, she sent her older child to one of the several private schools that took African American pupils. Ms. Marshall would not have been able to afford the burial expenses of buying a plot, having the grave dug and purchasing a coffin. It is possible that she had her child interred in an already existing grave of a spouse, another child or other family members. She would have needed assistance that was most probably from an African American beneficial society.

Pleasant Avenue was a dead end alley that ran north/south between Lombard Street and Minister Streets and between 7th and 8th Streets in center city Philadelphia. This street rarely appeared on a city street map. The ghettoization of African Americans in the city forced the poorest white and Black families to live on streets like Pleasant with notoriously crowded dwellings where diseases were quickly spread. What is missing from the above illustration is the piles of garbage laying in the street, clogging the gutters with black water that was home to numerous diseases that would kill hundreds. The city government would pay contractors to clean these alleys but it rarely happened unless an epidemic broke out in the neighborhoods and threatened adjoining white districts.

The day that the child was buried, there would have been a Bethel Church minister over the grave. He may have recited the prayer that Rev. Richard Allen wrote for the death of a child.

The tyrant, Death, came rushing in,

Last night his power did shew,

Out of this world this child did take,

No more the pleasant child is seen

To please the parent’s eye,

The tender plant, so fresh and green, 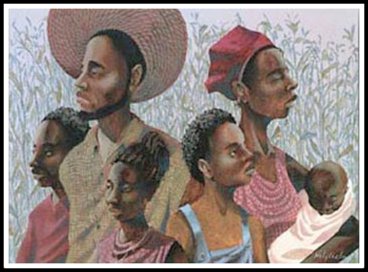 Twelve-year-old Robert Sadler died this date, November 17th, in 1846 and was buried at Bethel Burying Ground.

Twelve-year-old Robert Sadler died this date, November 17th, in 1846 of Pneumonia and was buried at Bethel Burying Ground. He was the son of William H. (37 y/o) and Hester Sadler (27 y/o). In addition, Robert was the brother of Ellen (possibly a twin) and three-year-old Rosana. Mr. Sadler worked as an oysterman and, during the winter months, as a waiter. Ms. Sadler worked as a laundress. All the children attended private daycare and school (Shiloh Infant School and Ms. Mary Till’s private school). The 1850 Federal census also lists Mary Davis (22 y/o) and Anna Harris (15 y/o) living with the Sadler family in the rear of #40 Bonsall Street (now Rodman Street). All of the Sadler family members and Ms. Davis were born in Pennsylvania. Ms. Harris was born in Delaware according to the 1850 Federal Census.

As a 20-year-old young man, William Sadler was a seaman as evidenced by his application for a U.S. Citizenship Affidavit of U.S. Born Seaman. This document was a nineteenth-century version of a passport that would assist an individual if an attempt was made against him to be kidnapped or “pressed” into service by the British.

Below is the approximate location of the Sadler home at 40 Bonsall Street. They lived in a shanty behind the main house that was little more than a shed or old stable for which they paid $4.85 a month for rent. The Sadlers were a proud family who regularly attended church services at Bethel AME and belonged to a beneficial society which likely assisted in paying for young Robert’s funeral expenses. William and Hester Sadler both were members of a temperance society, according to the 1838 and 1847 Philadelphia African American Censuses.

Ms. Sadler died in January of 1869 of “old age” at 60 years of age. Living to sixty was well beyond the average life expectancy of a Black female of that era which was 35 years of age. For a Black male, it was 32.5 years; white female/ 42.9 years and white male/40.4 years. Mr. Sadler’s death certificate was not found.

The African American community in Philadelphia was constantly under the threat of violence from the racist mobs that controlled the city. The year 1853 was a particularly ugly time in the northern districts of the city and the county. The deadly assaults on Black men walking alone in these areas started a couple weeks before the 4th of July and continued through the rest of the year. The white-owned newspapers even lamented about the unprovoked brutal physical attacks in the Northern Liberties, Fairmount and Spring Garden sections of the county.

In October of that year, a funeral procession started out from the Northern Liberties District and was headed for the Bethel Burying Ground to inter an honored African American citizen, Mr. James Johnson Richmond. The procession was led by Mr. Richmond’s fellow Masons who carried the coffin on their shoulders for twelve miles to the cemetery followed by family and friends. The cortège was led by a marching band and the Masons in their formal uniforms followed by a “long line” of family and friends.

The procession was harassed all along the eleven-mile route and the situation quickly escalated into a running battle between the mourners and the white mob. A mile from the cemetery the gauntlet worsens with the arrival of more gang members at 6th and Chestnut Street.

The latter half of 1853 was not only a time of heightening fears among whites in Philadelphia but throughout the country. In May the telegraph wires crackled with the breaking news that a large army of Black men, free and enslaved, were heading toward New Orleans to riot, rape, and pillage. The newspapers told the story of “half-crazed negroes” leading a “negro insurrection.” These rebels were goated on by abolitionists who were “depraved whites” creating a “negro mania.” Militias supposedly were called to arms to stop the wild horde. There was one problem. It never happened. There was no Black army, no insurgency and no army was rushing to the area. But that didn’t stop newspapers nationwide from speculating on the possible atrocities. What the hoax accomplished was the increase in tensions in the southern plantations and in the northern cities.

In the end, Mr. James Richmond, a waiter, lately of 417 N. 4th Street was laid to rest by his battered and bruised family and friends. But the threat of violence wouldn’t stop the long funeral procession from coming – day after day and week after week.