Seven-month-old Anthony Osbourne died this date, February 22nd, in 1849 and was buried at Bethel Burying Ground

Seven-month-old Anthony Osbourne died this date, February 22nd, in 1849 of Catarrh Fever and was buried at Bethel Burying Ground.  His parents Anthony (~34) and Jane (~29) lived with their other children Henry (~2) and Lucy (~7 months/a twin?); according to the 1850 Federal Census. 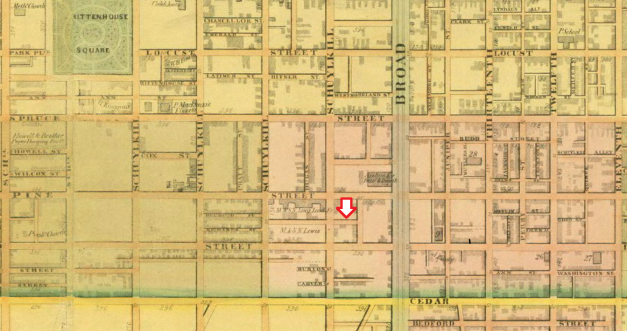 The arrow points to the location of the Osborne family residence in 1847.They resided in the rear of no. 2 Gulielma Street (now Naudain). The family lived in one room for which they paid $3 a month (about $75 in today’s currency.) Ms. Osbourne was occupied as a laundress and Anthony worked as a waiter no doubt on nearby Broad Street. Both adults and all the children were born in Pennsylvania according to the 1847 African American Census.

The 1847 Census reveals that 20 African American families lived on Gulielma Street for a told of 79 men, women and children. Most of the families lived in 12’x 12 hovels that used to be a horse stable or pig pen. The Osborne family lived in one of these hovels. Mr. and Mrs. Osburne could read and write, belonged to a beneficial society and regularly attended religious services. 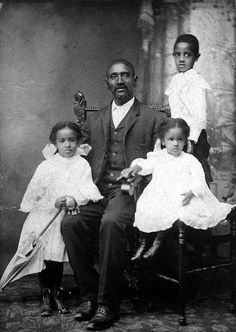 A 19th Century African American father with his children.

Eighty-nine-year-old Ellen Waters died this date, February 10th, in 1849 and was buried at Bethel Burying Ground

Eighty-nine-year-old Ellen Waters died this date, February 10th, in 1849 of “old age” and was buried at Bethel Burying Ground.

It is difficult to even remotely imagine what Ms. Water’s life was like. She was born into slavery before the American Revolution and self-reported that she was manumitted by her “mistress.”(1) Now at the time of her death in her 90th year of life, she lives in squalled poverty in one of the poorest and violent neighborhoods in the county.  A neighborhood where the white gang the “Killers” roam the area with impunity attacking and killing African American like they are some sort of animal to be hunted. (2)

A neighborhood where every year on March 27th the annual “Fireman’s Parade” would provide an opportunity for white drunken racists to rampage through the streets of Black neighborhoods attacking it citizens.(3)

Ms. Waters lived in Shanty #2 at 67 Bedford Street near the intersection of 7th and South in the Southwark District. She was fortunate enough to live in the 12’x 12′ shack rent free because it was owned by her grandson who apparently lived there also. He worked as a clerk in a second-hand clothing store. It appears she worked as a laundress. (1)

We may read the few isolated facts present by the public records but we will never truly understand.

Photo is of a 19th Century African American woman. Her name was not recorded.

Note: The 1837 African American Census records that Ms. Waters is a widow and worshiped at Bethel A.M.E. Church.

Thirty-two-year-old Henry Matthew died this date, February 3rd, in 1853 and was buried at Bethel Burying Ground

Thirty-two-year-old Henry Matthew died this date, February 3rd, in 1853 of Tuberculosis and was buried at Bethel Burying Ground. I am afraid that I am not able to definitely identify Mr. Matthew in any of the censuses or city directories. There is no mention of him in the local newspapers of the era. We do know that he was born in Philadelphia around 1821 and was married at the time of his death. The family lived in Currant Alley which ran from Walnut Street to Spruce Street between 10th and 11th streets in the 7th Ward of the City.

Mrs. Matthew reported her husband’s occupation as “Boat Builder.” Many African American men up and down the East Coast became assistants or apprentices in established companies that were engaged in various phases of shipbuilding. They were employed as caulkers, blacksmiths, carpenters, sailmakers, ropemakers, spinners and anchor makers.* Robert Forten was a successful African American sailmaker in the first half of the 19th Century Philadelphia.

Perhaps the most notable of these African American men was Frederick Douglass. In the final months of his enslavement, he was put to work in a Baltimore shipyard and learned the skills of a ship caulker. He would pack the joints between the boards of a ship with Oakum, a tarred spun fiber. After his escape from bondage, he plied his trade in Newport, Rhode Island. His brutal and violent struggles in the Baltimore shipyard are documented in his biography.**