Four-months-old Surry Valentine died on November 29th, in 1853 and was buried at Bethel Burying Ground.

Consequently, I believe the actual deceased family member was four-month-old Surry Valentine, a girl, who died of an illness that had as a symptom uncontrolled diarrhea. She was buried at Bethel Burying Ground.

In 1847, Little Pine Street was home to an industrious fifty-two families with a total of one hundred seventy-nine individuals who held a wide variety of occupations. The 1847 Philadelphia African American Census also shows that nineteen of the residents reported that they were formerly enslaved.

All the residents of the crowded Philadelphia streets, courts, and alleys lived in fear of fire. The thousands of old wood-frame buildings were all possible sources of fuel for a configuration. On a cold day in late January in 1848, the Valentine family and the rest of the residents of Little Pine Street heard the cry of FIRE!

The Valentines’ home escaped the blaze this time but the fear must have always remained.

Four-month-old Surry Valentine died on a late November day in 1853 and was buried at Bethel Burying Ground.

Twenty-seven-year-old Sarah Ann Prettyman died this date, November 26th in 1853 of Tuberculosis and was buried at Bethel Burying Ground. Information is limited on Ms. Prettyman. She appears in the 1850 U.S. Census, three years before her death.

Wilson’s Court was a small out-of-the-way alley on Carpenter Street between 8th and 9th Streets in the Moyamensing district of the county. The name of the thoroughfare was changed in 1858 to Gramment.

The wonder cure for “Spitting of Blood 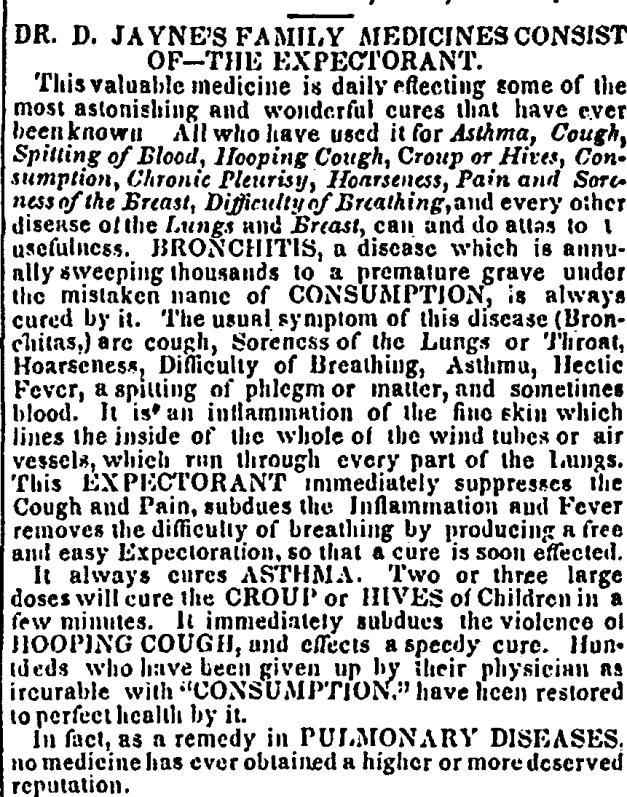 Ms. Prettyman was inflicted with Tuberculosis. A disease that was described by the ancient Greeks and known also as Consumption and Phthisis. It was a cruel disease that often took years to kill its victim while he or she coughed up blood from hemorrhaging lungs. The rich could ease some of the sufferings by “taking the waters” at a resort or at a mountain top spa with its clean dry air. The poor were stuck in smokey, soot-filled rooms that only ascerbated their misery. But they did have the dozens of “snake oil” concoctions like the one above that promised a cure from their sickness.

Sarah Ann Prettyman died on a late November day in 1853 and was buried at Bethel Burying Ground.

Note: The Census record above is somewhat confusing on the names of “Louisa” and “Lot.” I have confirmed this spelling through other documents.

Forty-nine-year-old Sarah Field is buried at Bethel Burying Ground with four of her babies.

Ms. Field took in wash and ironing, while her spouse Abraham Field worked as a waiter. They lived on Christian Street between 8th and 9th Street in the Moyamensing District of the county. Both attended church services and belonged to a beneficial society, per the 1847 African American Census.

Ms. Field was forty-years-old when she delivered a stillborn son on April 11th in 1842. The child was buried at Bethel Burying Ground. There were 385 stillborn births in 1842 Philadelphia, according to the Board of Health.

The Fields lost a one-year-old daughter on August 14th in 1844. She was buried at Bethel Burying Ground. The child died of “Summer Complaint,” also known as Cholera Infantum which was severe diarrhea in young children that occurred during the warm and hot months of the year. The bacterial disease was transmitted through human feces in water, milk or unwashed hands. Death frequently occurred in three to five days. According to the Philadelphia Board of Health records, 262 children succumbed to the disease in 1844.

Seven-month-old Edward Field died on March 1st in 1851 of a ruptured blood vessel and was buried at Bethel Burying Ground with his brother and sister.

On March 12th in 1851, at forty-nine-years of age, Sarah Field died of “Bed Fever.” She had given birth to a son the day before who died the same day as his mother. Both were buried at Bethel Burying Ground with the other Field children. “Bed Fever,” also known as Puerperal Fever, was a bacterial infection contracted by a woman who has given birth. Consequently, “blood poisoning” or septicemia sets in and takes the life of the woman. Board of Health records show that forty-one Philadelphia women died of Puerperal Fever in 1851. The number seems low.

The high rate of stillbirths in this era is attributed to the lack of proper maternal nutrition and the possible infection of the fetus with Tetanus or lockjaw. This is transmitted by the mother through an infected umbilical cord. (A Biohistory of 19th-Century Afro-American by Lesley M. Rankin-Hill, p. 77.)

The human remains of Ms. Sarah Field and her four children continue to be interred at Bethel Burying Ground under the Weccacoe Playground. (Photo by WHYY)

Thirty-three-year-old Eliza Gale died this date, November 12th, in 1853 and was buried at Bethel Burying Ground.

Thirty-three-year-old Eliza Gale died this date, November 12th, in 1853 and was buried at Bethel Burying Ground. Dr. Samuel Tucker assigned Ms. Gale’s cause of death as “Sudden Death.” It appears that the doctor did not take the time nor the care to investigate her medical history with her family. Dr. Tucker had a prestigious address at 212 Walnut Street and likely volunteered at the Southern Dispensary, a clinic for the poor. It could be that Tucker never saw Ms. Gale and simply signed a vague death certificate.

There is very little information on the Gales. The 1853 City Directory reports an Edward Gale living at the same address as Eliza Gale. He was employed as a drayman. A drayman was historically the driver of a dray, a flat-bed wagon pulled by horses or mules, that was used for transport of all kinds of goods. There is no information on any employment for Ms. Gale. It appears that the Gales may have been recent residents of the city. They lived on Duponceau Street – an infamous location.

Duponceau Street was located between Spruce and Walnut Streets and 8th and 9th Streets, very near Washington Square. For decades, the street was home to numerous bordellos or houses of prostitution. In addition to the local clientele, it was popular with traveling merchants, salesmen, and freight wagon drivers. (1) The previous name of the narrow thoroughfare was Blackberry Alley. In 1849, the city fathers thought that, by the act of changing the name, the Alley would somehow magically erase the problem. This was not the first nor the last time that this was attempted. It never worked and certainly did not work this time.

The police were always being called to Duponceau Street the “shame and disgrace of the city.”(2) At all times of the day and night, there were screaming, drunken brawls that spilled out on to the street from the brothels at #3, #4, #5, #6, #8, and #24 Duponceau Street. The Gales lived at #2 Duponceau! With the disturbances, the police would come and arrest a couple of the participants and leave the street to business as usual. 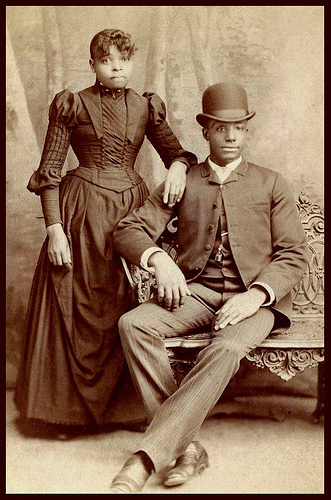 Eliza Gale died on a cold, wet day in November and was buried at Bethel Burying Ground. I could not locate any further information on Mr. Gale.

For further reading, please go to – Ill-Fame on Blackberry Alley

Sixty-one-year-old Moses Macklin died this date, November 6th, in 1848 and was buried at Bethel Burying Ground.

Sixty-one-year-old Moses Macklin died this date, November 6th, in 1848 of Pleurisy* and was buried at Bethel Burying Ground. Mr. Macklin was married to forty-seven-year-old Elizabeth Macklin who was a native of Delaware, according to the 1847 African American Census and the 1850 U.S. Census. Mr. Macklin was employed as a wood sawyer, while Ms. Macklin labored taking in washing and ironing. It appears that the Macklins had at least two adult children, William who was twenty-six-years old at the time of his father’s death and Isaac who was twenty-four. Both were born in Pennsylvania. 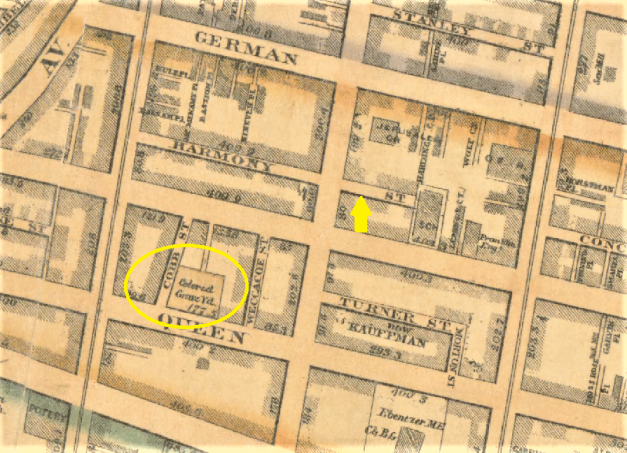 The yellow arrow illustrates the location of the Macklins’ home in the 300 block of Harmony Street. The Bethel Burying Ground is nearby, as illustrated by the yellow circle. The Macklin family owned their home, according to the 1847 Census. The value of the home in modern currency is approximately $22,250.

The 1847 Census shows the fifteen Black families on Harmony Street were industrious. The forty-nine residents were employed as:

Tragically, Moses and Elizabeth Macklin lost a four-month-old daughter, Hannah, twenty years before Mr. Macklin passed away. She died of Cholera in 1828 and was buried at Bethel Burying Ground.

Moses Macklin died on a day where the sun rose to a temperature of 32°, a thirty-degree drop from the day before. The temperature rose to 56° by 2 pm. Mr. Macklin was buried at Bethel Burying Ground next to his daughter.

*Pleurisy is severe chest pains caused by a bacterial infection. It also can be caused by a virus, such as the flu or by a fungus.