Forty-five-year-old Mary Stewart died this date, August 15th, in 1849, and was buried at Bethel Burying Ground.

Forty-five-year-old Mary Stewart died this date, August 15th in 1849, due to “Cramps of the Stomach” and was buried at Bethel Burying Ground. In 1847 she told the census taker that her spouse worked irregularly as a laborer, earning $3.50 a week, when he was able. He was not named. Ms. Stewart was employed as a domestic. In the 1847 Philadelphia African American Census, Ms. Stewart sadly reported that she had to sell “some of her things to procure the means to bury a child.” She added that “at the same time her son sold some of his things to bury his wife.” Either Mr. or Ms. Stewart had formerly been enslaved and gained their liberation through manumission.  The family was struggling just to stay alive. 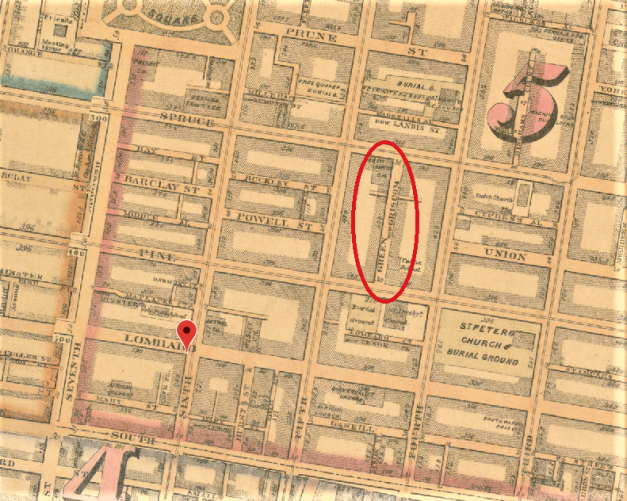 Green Street is enclosed in the red circle. The red pin illustrates the location and proximity of the Bethel A.M.E. Church.

Ms. Stewart and her family lived in a room at #19 Green Street for which they paid $3 a month and reported having only $15 in personal property. In modern currency, their rent equates to approximately $100 monthly and their property equates to approximately $500. Green Street was a block-long thoroughfare, packed with forty-seven Black families with a total of almost one-hundred-fifty men, women and children. 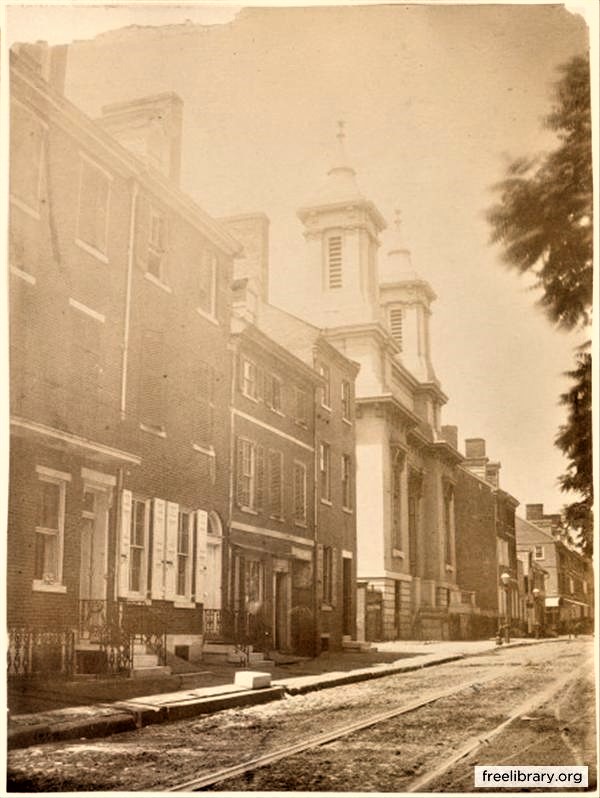 The above photo is of 4th and Spruce Streets, right around the corner from the residents of Green Street. It was taken circa 1859. These are some of the homes that the Black women of Green Street would work in as domestics, cooks, and wash women. (Free Library of Philadelphia Digital Collection)

Mary Stewart died on an August day where the temperature rose to 82° and saw a brief shower at 11am. The rest of the day was clear and fair. She was buried by her family, with dignity, at Bethel Burying Ground.

Posted by Terry Buckalew on August 9, 2020
Posted in: Uncategorized. Leave a comment

Twenty-five-year-old Alexander G. Hopkins died this date, August 9th, in 1842 of “Disease of the Visceral” and was buried at Bethel Burying Ground. The extremely vague and unspecific cause of death is suspicious. Was Mr. Hopkins a victim of white mob violence during the three-day assault on the Black community known as the Lombard Street Riots from August 1st through August 3rd in 1842? Did the young man succumb to his wounds?

According to the 1840 U.S. Census, Mr. Hopkins had a spouse, however, her name was not reported. The 1842 Philadelphia City Directory identified his occupation as a porter. The young couple lived at #5 Lisle Street in the upper portion of the Moyamensing District.  The narrow thoroughfare was home to Black men and women who were employed as waiters, porters, seamstresses, carpenters, laundresses, sailmakers, and tailoresses (female tailors).  The Black children in the neighborhood attended the St. Mary’s Street School or the Lombard Street School. 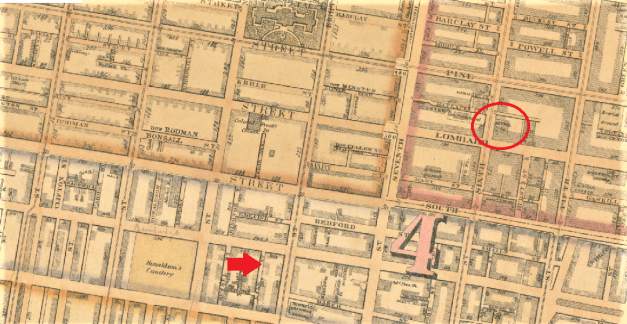 The red arrow above illustrates the location of the Hopkins’ residence on Lisle Street. The red circle shows the location and proximity of the Bethel A.M.E. Church at Sixth and Locust Streets. 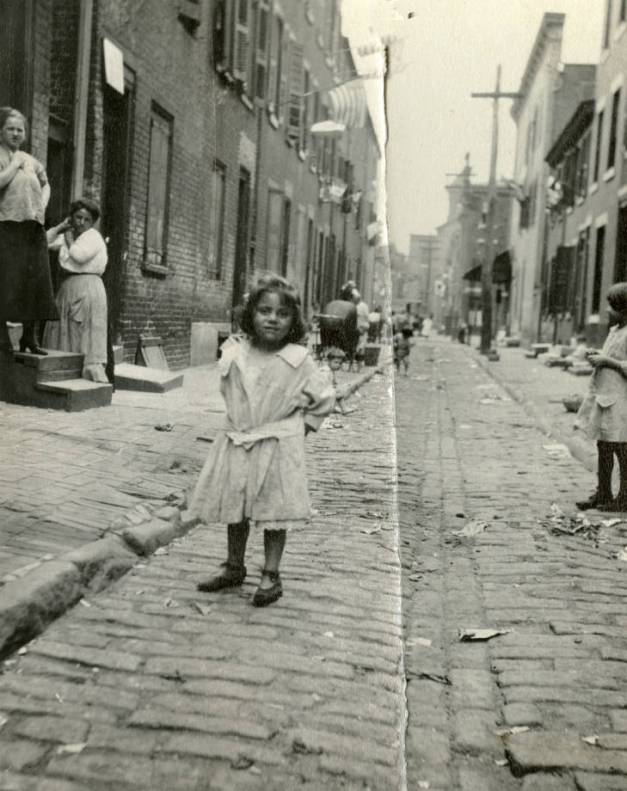 Mildred Street (formerly Lisle Street) in 1920. By this time, the neighborhood was a mix of Jewish and Italian Americans. (Temple University Digital Collection)

The week before Mr. Hopkins died, Mr. Charles Black, an African American man, was dragged down the stairs from the second floor in his home on Lombard Street and beaten almost to death in front of his young son. Supposedly, Mr. Black survived his wounds. However, his name is absent from future city directories. (1)

Mr. Hopkins died on a partly clear day where the temperature rose to 79 degrees by late afternoon. He was buried by his family, with dignity, at Bethel Burying Ground.

Eleven-year-old John Holly died on August 3rd, in 1848, and was buried at Bethel Burying Ground.

Eleven-year-old John Holly died on August 3rd in 1848 from drowning and was buried at Bethel Burying Ground. John was fishing with friends on the West Philadelphia Canal, near the north side of the Market Street Bridge, when he fell into the Schuylkill River and drown, according to the City Coroner. His body was recovered almost immediately. 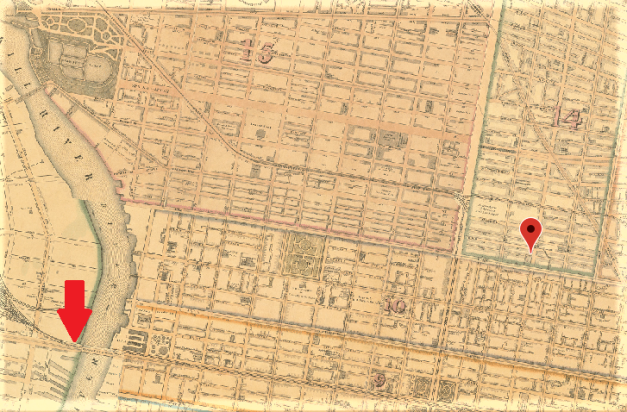 The red pin indicates the approximate location of the Holly residence on Pearl Street above 12th Street. The red arrow shows the location where young John was fishing when he drowned.

John Holly’s parents were Ann and Aaron Holly. Ms. Holly was forty-one-year-old at the time of her son’s death and Mr. Holly was forty-seven. She was born in Delaware and he was born in Pennsylvania. They had a daughter Harriet, who was thirteen-years-old at the time of her brother’s death and who was also born in Pennsylvania, according to the 1850 U.S. Census.

Aaron Holly was employed as a laborer earning $4 a week while Ann Holly toiled as a washwoman, reportedly making $2 a week. Earning that much for a washwoman usually meant that she had steady clients. Their apartment at #17 Pearl Street in the Spring Garden District contained three rooms. The rent was expensive at $5 a month and they may have rented out a room to help with the cost. The entire family attended church services, according to the 1847 Philadelphia African American Census. 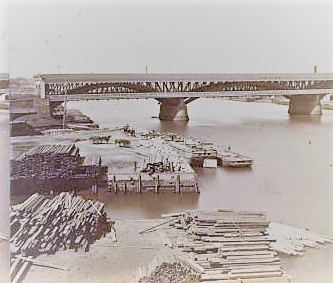 John Holly was one of nineteen Philadelphia boys to die by drowning in the summer of 1848.

The eleven-year-old died on a clear August day where the temperature rose to 80° by mid-day. His parents buried him, with dignity, at Bethel Burying Ground.

Eighty-year-old Sylvia Benson died this date, August 2nd, in 1841, and was buried at Bethel Burying Ground.

Eighty-year-old Sylvia Benson died this date, August 2nd, in 1841 of Breast Cancer and was buried at Bethel Burying Ground. A widow, Ms. Benson was characterized as a “gentlewoman” in the 1840 Philadelphia City Directory. The 1837 Philadelphia African American Census reports her occupation as a washwoman. The Census listed another woman living with Ms. Benson who also worked as a washwoman. Both were not natives of Pennsylvania.

Ms. Benson stated in the Census that she was formerly enslaved and her husband “bought” her freedom for $200. I don’t have the words. 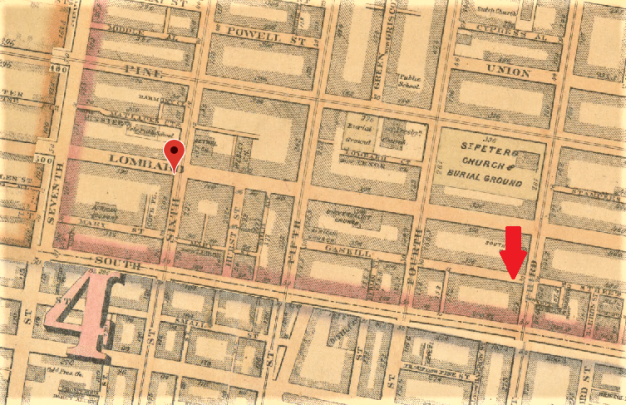 The red arrow indicates the location of Ms. Benson’s home at #96 Gaskill Street. The red pin illustrates the location and the proximity of Bethel AME Church at 6th and Lombard Streets. Ms. Benson reported to the 1837 census taker that she and her roommate both worshiped at Bethel Church. The women paid $4.15 a month in rent which is a considerable amount. Ms. Benson reported $155 of personal property which equates to approximately $4,475 in modern currency.

Gaskill Street was a narrow crowded street that was home to hundreds of Black men, women, and children of all ages. It was a thoroughfare of poverty, disease, and the working poor. To alleviate some of the child care burdens, the Infant School Society of Philadelphia established a daycare and a school for one hundred Black infants and children of Gaskill Street. Ms. Benson was a daily witness to this hustle and bustle on her busy street. 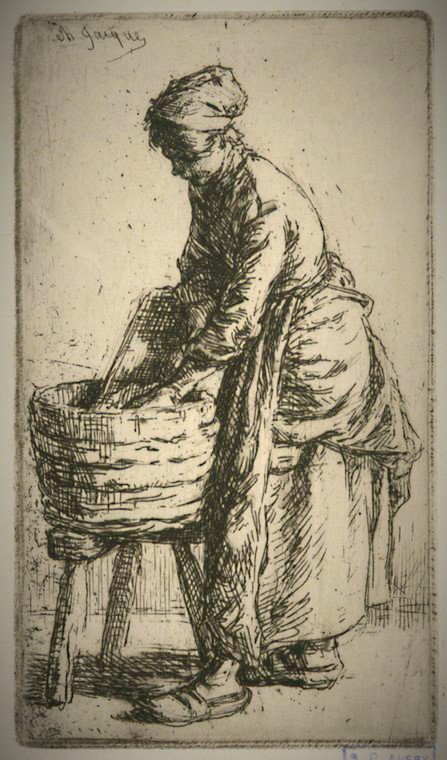 Sylvia Benson was born in approximately 1761 and likely in the Delaware or Maryland colonies.  Over the 19th century, Philadelphia was the journey’s end for a significant number of recently liberated Black women and men. Sadly, I could not find any information on her spouse or possible children.

Sylvia Benson died on a day where the temperature rose to 82° by midday. The day started out clear but turned cloudy by early evening. She was buried, with dignity, at Bethel Burying Ground.