The one-day-old Rex baby died this date, January 15th, in 1835 and was buried at Bethel Burying Ground. 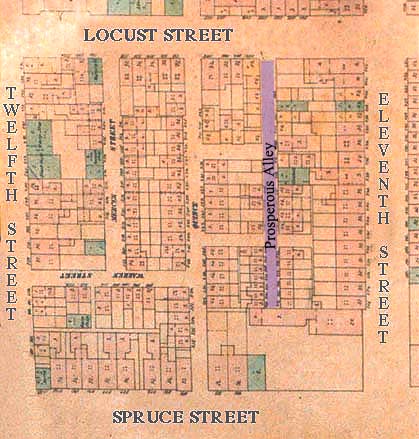 Ernest Hexamer and William Locher. Maps of the City of Philadelphia. Volume 3, Plate 32. (Philadelphia 1858-1862). From Places in Time website. (www.brynmawr.edu/iconog)

The one-day-old infant of Martha and Moses Rex died this date, January 15th, in 1835 of convulsions and was buried at Bethel Burying Ground. The family lived at 221 Prosperous Alley (see map above). The alley ran south from Locust Street between 11th and Quince. The child’s death certificate is not available. Martha was employed as a day worker and Moses was a Porter according to the 1847 African American Census. Both were born into enslavement and eventually manumitted. They had three other children, two boys, and a girl. According to the 1837 African American Census, the family worshiped at the First African Baptist Church which was located at 8th and Vine Street. (See “A Biohistory of 19th-Century Afro-American: The Burial Remains of a Philadelphia Cemetery,” by Lesley M. Rankin-Hill).

Renovation of playground over cemetery is halted, March 1, 2014

In July 2013, the URS Corporation (URS) conducted a Phase IB archaeological investigation of the Mother Bethel African Methodist Episcopal Church Burying Ground (1810–circa 1864), located in the Queen Village neighborhood of Philadelphia. This investigation was performed on behalf of the Pennsylvania Horticultural Society (PHS) and in advance of planned renovations to the City of Philadelphia’s Weccacoe Playground property (circa 1906–present). Proposed improvements to the playground have the potential to impact portions of Mother Bethel’s cemetery, which remains preserved below the southwest corner of the larger property. This investigation was conducted in order to collect critical information that would allow playground renovations to move forward in a manner that would not impact historic burials, and that will ensure the long-term preservation of this significant African American burying ground.

Phase IB testing involved the excavation of four backhoe trenches within and along the boundaries of the cemetery. Trench excavations only extended to the point below surface at which archaeological evidence associated with the cemetery was encountered. In most instances, the burial-related evidence identified consisted of well-preserved grave shaft features; however, in a handful of cases, trench excavation was halted when decayed, intact coffin wood was exposed. At no point during this investigation were intact human skeletal remains exposed, uncovered, or disturbed.

Trench excavations succeeded in producing a significant amount of information related to the Mother Bethel Burying Ground. In particular, testing was able to determine that soils containing evidence of intact burial features are present immediately below the playground asphalt and gravel sub-base. While the depth below surface at which burial evidence was identified did vary somewhat across the cemetery, the shallowest depth at which grave shafts appeared was approximately 1.8 feet below the present surface. Evidence of intact burial remains was identified at depths of between 2.5 and 3 feet below the surface.

Additional findings from this investigation included:

To view a video of lead archeologist, Doug Mooney discussing his team’s findings click on – https://www.youtube.com/watch?v=Sxj-Nn2Xs-s&feature=youtu.be