Fifty-eight-year-old Rebecca Boardley died this date, May 21th, in 1848 and was buried at Bethel Burying Ground

Fifty-eight-year-old Rebecca Boardley died this date, May 21th, in 1848 of Cancer and was buried at Bethel Burying Ground. “Rheumatic Metastasis” is an archaic term no longer used. It most commonly meant cancer of the brain but could also mean cancer of the heart.

When Ms. Boardley was forty-seven-years-old, eleven years previous, she reported her occupation as the proprietress of a clothing store according to the 1838 African American Census. Additionally, it records that she was not born into enslavement and owned $1,000 in personal property or approximately $5,000 in today’s currency. It is likely she was born in Delaware.

In the 1847 African American Census, Ms. Boardley reported her occupation as dressmaker and tailoress. She resided at 361 Lombard Street Alley near the intersection of Lombard Street and South 10th Street in the Cedar District of center city Philadelphia.

Ms. Boardley was a widow and the matriarch of a large industrious family. Her seven adult children and their spouses lived with her and were employed as a lathe turner & wood carver, a tailor, two waiters and two who worked as domestics. All could read and write and attended religious services at Bethel A.M.E. Church (now Mother Bethel).

Approximate location of the Boardley household.

Seventy-four-year-old Fanny Jackson died this date, May 8th, in 1841 after being crushed under the collapsed north wall of Bethel Church (now Mother Bethel) on May 1st. She was taken to Pennsylvania Hospital but succumbed to her injuries a week later on the 8th and was buried at Bethel Burying Ground. According to the 1838 Philadelphia African American Census, Ms. Thomas was a widow, mother, and grandmother. She worked as a laundress and was released from enslavement by manumission. 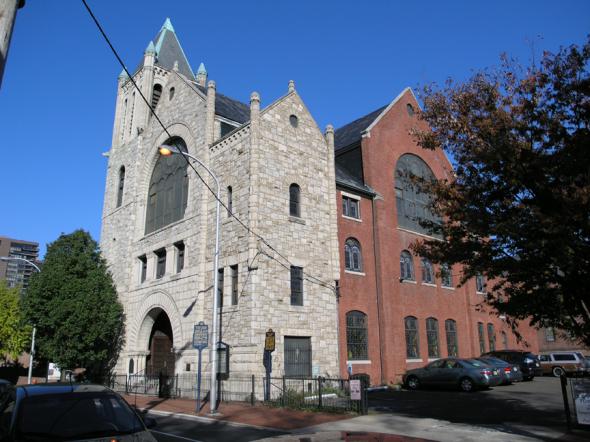 This is a photo of Mother Bethel church as it stands today. The parking lot was the location of the three small tenement building that was home to several families including the family of Fanny Thomas. The brick wall that faces the parking lot collapsed and fell on the flimsy wood structures killing four and wounded at least six.

Twenty-four-year-old Thomas Houghten died this date, May 6th, in 1852 and was buried at Bethel Burying Ground

Twenty-four-year-old Thomas Houghten died this date, May 6th*, in 1852 of Small Pox and was buried at Bethel Burying Ground. I am unable to locate any additional information on Mr. Houghten or by using variations of his last name. Dr. Ashton, who has signed many of the death certificates for those buried at Bethel Burying Ground, lived in center city Philadelphia and also practiced in the city’s dispensaries or clinics on south 5th Street and Shippen Street (now Bainbridge).

What we do know about Mr. Houghten is that he died because he was Black and poor. Vaccine for Small Pox had been around for decades and had been used successfully if administered correctly. The wealthy rarely died of the disease because they had private physicians who followed the appropriate protocols. The Philadelphia Board of Heath was responsible for vaccinating the city’s citizens and fatally failed the poorest among them. It was not until thousands had died that the Board established a free public vaccination program (1853-54). Other major cities had established this type of program years before. It was not always the Board’s fault. The City Council would either fail to allocate funding or approve only a fraction of what it would take to run an efficient program. **

Deaths in Philadelphia due to Small Pox***

Mr. Houghton was not to be one of the last victims of a corrupt and incompetent public health system in Philadelphia. After the threat of the disease diminished the City Council cut funding to the program which caused the disease to come back with a fury and cause the needless deaths of thousands of the city’s poorest citizens.

The cause of death due to Small Pox can be from heart failure, dramatic loss of fluids, sepsis (blood poisoning) or pneumonia. Death from ordinary Small Pox usually occurs after bitter suffering between the 10th and 16th days of the illness. In early hemorrhagic Small Pox, death occurs about six days after the fever develops.

For further reading on the subject, I suggest Smallpox: The Death of a Disease – The Inside Story of Eradicating a Worldwide Killer by Henderson and Preston.

*It appears that Dr. Ashton wrote the wrong month. This death certificate was filed by the Health Department with thousands of other that were dated the first week of May 1852. Regardless it stands as the sole documentation of Mr. Houghten’s life.