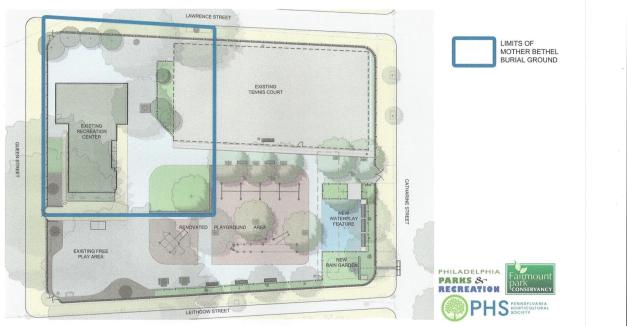 The area bordered in blue is the Bethel Burying Ground. The graves are situated only 2 to 3 feet below the surface of the playground.

Five-year-old Charlot Fitzpearl died this date, November 26th, in 1820 and was buried at Bethel Burying Ground

Five-year-old Charlot Fitzpearl died this date, November 26th, in the year 180 and was buried at Bethel Burying Ground. Her actual name was probably Charlotte Fitzgerald. There was no doctor in attendance when she died of “Decay.” This term describes the individual’s condition and is no assistance in ascertaining the exact cause of death. The child’s death could have been from dozens of sources including lead poisoning, Sickle Cell Disease, lack of nutrition, trauma, a congenital disease or the many serious respiratory diseases that were epidemic in the community. 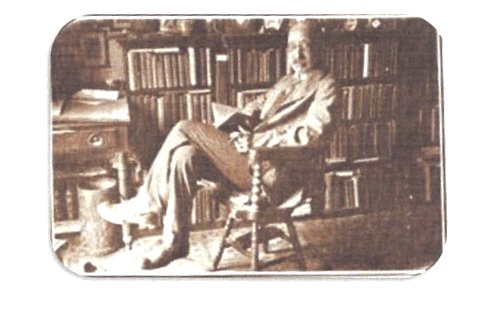 William Carl Bolivar was a journalist, bibliophile and historical researcher with over 3,000 book, magazines and journals in his personal collection. He wrote a weekly column for the Philadelphia Tribune titled “Pencil Pusher Points” where he regaled his readers with the history of the 19th century Philadelphia Black men and women who pioneered their communities. He was born and raised at 9th and Rodman Streets in Philadelphia and as a child witnessed first hand some of the remarkable individuals who persevered to become educators, physicians and accomplished business leaders. In his October 10, 1914 column he writes about the Bethel Burying Ground, its beginnings and some of the families that were buried there. To read the full article please click on the following: WCB 10-10-1914

On this date, November 23rd, in 1843 Diana Jackson died at 101 years of age and was buried at Bethel Burying Ground

On this date, November 23rd, in 1843, Diana Jackson died of “old age” and is buried at Bethel Burying Ground. She had reached the age of 101 years. Of those interred, whose death certificates have survived, there are 19 individuals buried at the Queen Street cemetery between the ages of 90 and 103 years of age. This is astounding considering their life expediency was in the late 20s to early 30s! There is no reliable data at this point to determine with specificity the life expectancies of the Black men and women in 19th century Philadelphia. However, the First African Baptist Church Cemetery (FABC), located at 8th and Vine Streets in Philadelphia, was excavated and the remains examined during the 1980s. There is a 21-year overlap in usage between this cemetery and the Bethel Burying Ground – circa 1822 to 1843. There were 135 skeletons recovered and studied from the Vine Street graveyard. It was determined that the life expectancy of these individuals was 26.59 years according to anthropologist Dr. Lesley M. Rankin-Hill, author of A Biohistory of 19th-Century Afro-Americans: The Burial Remains of a Philadelphia Cemetery. This small book is a wealth of information on the 19th century Philadelphia African American community and the medical and socioeconomic struggles they endured. A must read for anyone who is serious about understanding the history of Black Philadelphians.

In addition, Rebecca Yamin’s Digging in the City of Brotherly Love: Stories from Philadelphia Archeology offers vital insights into the FABC excavation and the community outreach of the archeologists handling such a culturally sensitive project. I used their template for community outreach in my initial contact with relevant “shareholders” concerning the future of the Bethel Burying Ground.  ”The Swift Progress of Population”: A Documentary and Bibliographic Study of Philadelphia’s Growth, 1642-1859 is not for the casual reader. It is a valuable guide to the demographics of early Philadelphia.  I feel that every time I open this book I discover something new and remarkable. Dr. Susan E. Klepp, the book’s author, is the former Professor of Colonial America and American Women’s History at Temple University.

Mr. William Winters, 40 years old, died this date, November 20th, in 1824 and was buried at Bethel Burying Ground. He was a labourer who lived at 269 Catherine Street just two blocks from the burial ground. His cause of death was Typhus Fever. Some may confuse Typhus and Typhoid. I know I initially did. The name Typhoid means “resembling typhus” and comes from the symptoms common to Typhoid and Typhus. Despite this similarity of their names, Typhoid and Typhus are distinct diseases and are caused by different species of bacteria.

Typhus is caused by the rickettsiae bacteria and transmitted by flea, mite and tick bites. When these parasites bite a victim, they leave the rickettsaie bacteria behind. Scratching the bite opens the skin to the bacteria, allowing them to enter the bloodstream. Within the bloodstream, the bacteria grow and replicate. A rash covers the entire body of the victim accompanied by a high fever. The individual will suffer petechaie, which is bleeding into and through the skin.  Delirium, stupor, hypotension, and shock occurs followed by death.

Typhoid fever is a totally different bacterial disease transmitted by the ingestion of food or water contaminated with the feces of an infected person, which contain the bacterium Salmonella enterica. This disease has been a deadly human disease for thousands of years, flourishing in conditions of poor sanitation, crowding, and poverty. After becoming infected the victim, develops a high fever and becomes exhausted and emaciated due to constant diarrhea and the perforation of the intestines. The patient develops septicemia, slips into a coma and dies.

Although antibiotics have markedly reduced the frequency of these diseases in the developed world, it remains endemic in developing countries.

DUTIES OF THE CHURCH SEXTON

It was the duty of the church sexton of Bethel AME Church to dig the grave or have someone do it; supervisor the management of the Bethel Burying Ground and maintain the upkeep of the cemetery’s grounds. The sexton was also responsible for the official paperwork that went along with every burial. The law stated that no sexton was permitted to bury a body without a note (see above image) from an attending physician or a family member stating the deceased name, age, date of death and cause of death.

The contents of this note were then entered on a form (See image below) from the Health Department. This form along with the note had to be delivered by the sexton to the Health Department by the Saturday of every week for publication. Often the physician would not have all that information available to him and later the sexton would fill in the missing piece on the official form. Such was the case with the above.

Renovation of playground over cemetery is halted, March 1, 2014

On this date, November 16th, in 1842 Mary Ann White died and is buried at Bethel Burying Ground 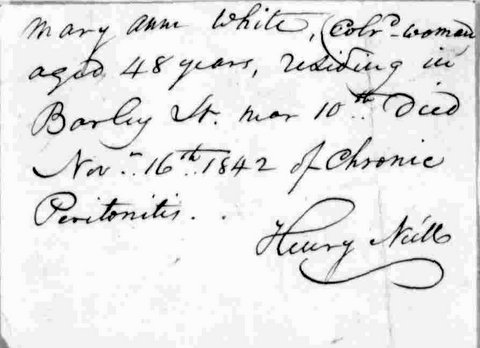 On November 16, 1842, Mary Ann White died at 48 years of age of Chronic Peritonitis. This very painful condition was incurable before the advent of antibiotics. One common manner for a woman to die of this condition was a botched abortion. Some deaths are recorded as caused by an abortion, but more often they are labeled as “Peritonitis.” For more on the subject please see – When Abortion Was a Crime: Women, Medicine, and Law in the United States, by Leslie J. Reagan.

Ms. White lived in Barley Street, really an alley, in the Queen Village neighborhood of the city. Barley is now Waverly Street. Below is a photo of this ally as it currently looks.

Nearly two dozen people met at 4th Street and Washington Avenue in South Philadelphia on Saturday where they marched several blocks to the Weccacoe playground on Queen Street to honor the remains of some 5,000 African people said to be buried beneath the playground.

“The City of Philadelphia, Department of Parks and Recreation is trying to renovate the playground with no regard for the graves of our ancestors buried there,” read materials released by the group Friends of Bethel Burial Ground Coalition who organized the event.

“These Black Philadelphians lived and died in Southwark during the 18th and 19th centuries. They are the founding members of the Black community in Philadelphia. They are our ancestors in the African Diaspora.”

Supporters gathered wearing traditional African garb, and green, black and red flags were distributed to marchers who met at Fourth and Washington.

Once gathered, the group marched from Washington Avenue to Queen Street where they gathered in the playground in which the remains of the dead were said to be buried.

Red chalk marked the areas where the bodies were said to be and participants were asked to avoid stepping on the area demarcated.

The ceremony began with a call of the drums, in which traditional drummers played as the people gathered at the site.

Following the drums was a libation in which the names of those buried were mentioned and ancestors remembered.

“We are here to honor the ancestors that are buried about 18 inches beneath the surface of that playground, 5,000 Black ancestors from the 1700s and 1800s,” said Joe Certaine, who organized the event.

According to him, those buried founded the Black community in Philadelphia.

“At one time this whole area was pretty much relegated to Black residents, and those are the residents that are buried in the cemetery,” he said.

“Since the rediscovery of this historic site there has been no public prayer offered for our ancestors at the place of their interment,” Certaine said

Those prayers were conducted on Saturday and the memories of those buried honored during the ceremony.

Ron McCoy is a member of the group Avenging the Ancestors and conducted the libation ceremony during the event.

“It’s traditional before any event that has to do with Africans that we have libations,” McCoy said. “We give respect to our ancestors and the creator and ask them to be with us.”

“We stand now on this Earth that received the earthly remains of our brothers and our sisters, beneath the open expanse of the heavens which received their spirits,” said broadcaster Nick Taliaferro who spoke to the crowd gathered. “Make sure that these lives are not forgotten; always remember the ugly scar that is a part of our American history that allowed some people to be treated as less than human beings.”

“How would you feel if somebody pissed on your mother’s grave?” asked attorney Michael Coard to the crowd. “That is what is happening here. If you look at where the bathrooms are, they are right above your mothers, your grandmothers, your fathers and your grandfathers.”

Others at the event included Min. Rodney Muhammad of Mosque No. 12 and Rev. Dr. Renee McKenzie of the Church of the Advocate.

Coard said Black people ought to be outraged.

“Where else in America? Where else in Pennsylvania? Where else in Philadelphia can 5,000 Jewish people, 5,000 Italian people or 5,000 English people be buried under a trash dump and there not be some type of acknowledgment and nobody knows about it?” he asked.

Eighteen-year-old Martin Adams died this date, November 13th, in 1847. The cause of death was Consumption. We know the disease today as Tuberculosis.  Martin lived on Corn Street (now American Street) below Wharton Street. His home was near 2nd and Christians Street in the Southwark neighborhood now known to some as Queen Village.

Tuberculosis was the leading cause of death (17.6%) for those buried at the Bethel Burying Ground.