Two-year-old Robert Ashton died this date, March 29th, in 1852 and was buried at Bethel Burying Ground.

Two-year-old Robert Ashton died this date, March 29th, in 1852 of an unknown disease that infected his brain and lungs and was buried at Bethel Burying Ground. Little Robert’s parents John (47) and Catharine (44) also had four other children: John, Jr. (11), Catharine (9), Maria (7) and Henry (5), according to the 1850 Federal Census. John worked as a waiter making $15 a month or about $493 in modern currency, according to the 1847 African American Census.

The Ashton family lived at 9 Ronaldson Street that runs from South to Bainbridge Streets, between 9th and 10th Streets. The house sat up the street from the large Ronaldson Cemetery. 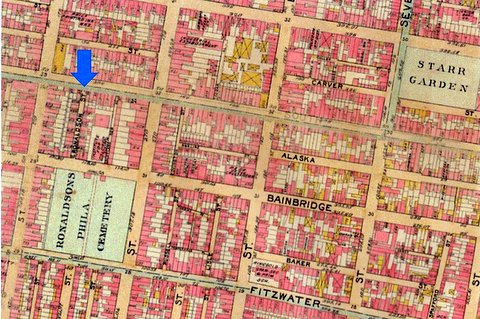 The arrow indicates the approximate location of the Ashton home. It consisted of one room for which they paid $5 ($125) a month. Ronaldson Street was also home to the father of the Underground Railroad William Still. Therefore, the street likely saw a good deal of recently liberated African and African Americans who were formerly enslaved on the run. Ronaldson was also the home to Reverend Benjamin Templeton, pastor of the Second African Presbyterian Church and, at one time, to the offices of The Christian Recorder.

Sadly, the Ashtons would lose their 11-year-old son John, Jr. to a wasting disease the very next day. His biographical sketch is also on this website. The brothers are buried together at Bethel Burying Ground.

Sixty-five-year-old Ann Wiggins died this date March 24th, in 1853 and was buried at Bethel Burying Ground

Sixth-five-year-old Ann Wiggins died this date, March 24th, in 1850 of Typhoid Fever and was buried at Bethel Burying Ground. The 1847 African American Census reports that Ms. Wiggins was a washerwoman “when she can get it.” She resided in an 11’x11′ room at 3 Pleasant Avenue with a 15-year-old female who works “in-service” so is probably not there very much. They pay $2.30 a month for rent which is roughly equivalent to $50 in today’s currency.

Pleasant Avenue was a dead end alley that ran north/south between Lombard Street and Minister Streets between 7th and 8th Streets in center city Philadelphia. Pleasant Avenue rarely appeared on a city street map. Ms. Wiggins died from Typhoid Fever which is caused by ingesting a certain strain of Salmonella bacteria present in water contaminated with diseased human excrement. Between 1852 and 1854 three hundred and fifty-five citizens died of this disease. This is different from Typhus Fever which is spread by fleas from diseased rats. Certain breeds of ticks also carried the disease.

Below is the link to the current Bethel Burying Ground Name Directory.

The following is an alphabetical directory of some of the African American Philadelphians who were buried at Bethel Burying Ground from 1810 to 1864. Currently, 2,489 individuals have been identified through City of Philadelphia death records and historic newspapers. Research is ongoing to identify the remainder of the 5,000+ estimated to be buried on Queen Street in old Southwark.

Those names that are in bold type have short biographical sketches at https://bethelburyinggroundproject.com/.

Ten-year-old Mary Ann Henry died this date, March 16th, in 1847 from a brain disease and was buried at Bethel Burying Ground. She was the adopted daughter of Joseph Henry; spouse’s name unknown. The Henry family ran a food stand at a local market according to the 1847 African American Census.What they peddled is unknown, however, it is possible that they sold pies and/or cakes.

The Henry family lived at 10 Raspberry Alley near the intersection of 9th and Walnut Streets in center city Philadelphia. They lived in one room for which they paid $5 a week, probably one week take home salary for Mr. Henry.  They also had an older woman living with them, presumably the mother of one of the Henrys.

According to 1847 Census, there were 17 African American families living on small Raspberry Alley accounting for 86 individuals. The occupations of these citizens included a dentist, school teacher, dressmaker, laborer, and laundress. In 1897 the name of Raspberry Alley was changed to Hutchinson Street.

The red arrow indicates the approximate location of the Henry family residence.

John Bliss was buried this date, March 13th, in 1848 at Bethel Burying Ground

The above article appeared in the March 14, 1848, edition of The Philadelphia Inquirer. No death certificate that has survived and he is not listed in any city directories, local or federal censuses. He resided near 6th and Fitzwater Streets only two blocks from Bethel Burying Ground. He was buried with full Masonic honors “in a costly manner.”

Mr. Bliss was a musician in the renowned Frank Johnson’s Band.

The 7-month-old Sloan child died this date, March 11th, in 1845 and was buried at Bethel Burying Ground.

The seven-month-old child of Paul and Elizabeth Sloan died this date, March 11th, in 1845. He was misdiagnosed with the cause of death as “teething” which was due to a lack of scientific knowledge in that era. Please see the article below.

The attending physician scribbled the baby’s first name so we cannot be certain of its gender. Paul was a bootmaker making $6 per week and Elizabeth was a dressmaker according to the 1847 African American Census. Both parents were artisans. It is not unheard of however it is rare that an African American would be allowed to make boots by the all white bootmakers association. This speaks to the skill and talent that Mr. Sloan brought to his work.Blacks were more likely to do shoe repair.

The Sloans lived at 20 Washington on Street near the intersection of 6th and Walnut Streets in center city Philadelphia. They paid almost $3 a month for this room. In today’s currency, it would be about $75 for this room that may have been only 10’x10′.

Ms. Sloan was one of many African-American women who were dressmakers and artists through the 19th century. Maybe one of the most famous was the dressmaker for Mary Todd Lincoln. See her story at http://www.blackpast.org/aah/keckley-elizabeth-hobbs-1818-1907

There is a risk that fever around the age of teething is dismissed as due to teething when it is actually due to illness, particularly infection by herpes viruses. “Coincidentally, primary tooth eruption begins at about the time that infants are losing maternal antibody protection against the herpes virus. Also, reports on teething difficulties have recorded symptoms which are remarkably consistent with primary oral herpetic infection such as fever, irritability, sleeplessness, and difficulty with eating.” “Younger infants with higher residual levels of antibodies would experience milder infections and these would be more likely to go unrecognized or be dismissed as teething difficulty. (https://en.wikipedia.org/wiki/Teething)