Life and death were grim for the Philadelphia African American poor on Baker Street in 1847. Many slept in windowless basements that were often flooded with wastewater. These pitch-black hellholes cost twelve cents a night that could hold dozens of men, women, and children who usually stayed during cold weather. The backyards of these hovels were filled with 6′ x 6′ windowless wood boxes with dirt floors that were frequently wet and flooded when it rained. There were no chimneys, so a hole was cut in the door to allow smoke to escape from cooking fires. Sometimes eight humans were found living in one of these huts. Grotesquely, it was not uncommon to have someone die in one of these and a new resident would move in before the body could be removed by the authorities. These living conditions were perfect for spreading deadly diseases. The white newspapers mockingly called this block the “Arcade,” as in a human zoo. (1)

The Spring and Summer of 1847 Philadelphia were especially bad. The weather was awful, along with the mosquitos, the rats, the fleas, and the water. Pigs and wild dogs freely roamed the streets, adding their fetid waste to that of the working horses of cart and carriage. September arrived with little change. The residents were dying by the dozen and bodies were piling up. Thirty in one week. Baker Street had become a slaughterhouse.

One thousand thirteen Philadelphia children died of Scarlet Fever in 1847. The cemeteries couldn’t keep up with the demand. The Black cemeteries were small and few. The corpses were piling up at Bethel Burying Ground and there wasn’t enough time to bury everyone in a six-foot-deep grave. The small cemetery did not have a vault to store bodies waiting for interment. The Bethel cemetery was not the only Southwark burial ground to be cited for the same conditions.

W.J. Mullen was the slumlord who owned the majority of the structures on Baker Street. On his own, and I suspect with the help of the local white gang, forcibly removed the majority of the destitute on Baker Street. He didn’t do this with a good heart. He wanted the buildings and shacks torn down so he could either sell the properties or rebuild and rent to families that could afford much higher rents. His heavy-handed actions created a backlash that required Mullen to ask for police assistance to protect his henchmen. Within days, people were sneaking back into their homes. It was winter and Baker Street was better than nothing. To the surprise of no one, a fire broke out in the early morning of December 11th in one of the structures and spread quickly through the old wooden structures. The fire companies later stated they had problems putting out the fires because of the “numerous obstructions” they encountered. They did succeed in suppressing the flames after the damage was done. (3)

Baker Street wasn’t the first Black neighborhood this happened to. Nor would it be the last.

(1) A Statistical inquiry into the condition of the people of colour, of the city and districts of Philadelphia, Walton, 1849; Philadelphia Inquirer, 8 Nov 1847, p. 2.

Today Senator Kamala Devi Harris will stand in the Capitol Building and she will take the oath of office for the Vice President of the United States. I hope you will take a moment to remember Ignatius Beck. In 1798 he was one of the four hundred enslaved Black men that were “rented” to the United States government to work on the erection of the Capitol building in Washington, D.C.

After his liberation, Mr. Beck eventually came to Philadelphia and became a valuable member of Mother Bethel and a significant conductor on the Underground Railroad. After a very full life he was buried by his family, with dignity, at Bethel Burying Ground.

As we watch the glorious moment Vice President Harris is sworn in, maybe take a moment to remember that two hundred twenty-three years ago a Black man lifted that stone that VP Harris is standing on.

In the 18th century, Philadelphia African Americans were buried in unmarked trenches and pits in what we now know as Washington Square at Sixth and Walnut Streets in the city. The Free African Society led by courageous Black citizens attempted to have the city government protect the graves from body snatchers and vandals. They refused so the Black community took the duty of defending the ancestors in “Congo Square” upon themselves. 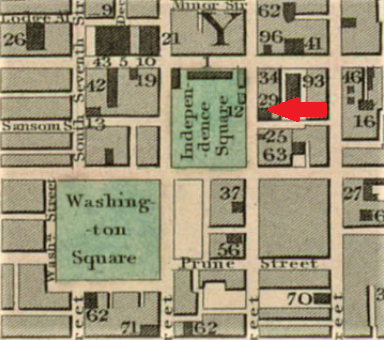 The red arrow illustrates the location of Dr. Shippen’s morgue and teaching classroom to nearby Washington Square and the Potter’s Field.

Mr. Lamont B. Steptoe is a poet who took it upon himself “for five years to sit among the trees and unmarked graves [of Washington Square/Congo Square] and allow this place to speak” to him. As a result, we have a beautiful book of poetry and self-reflection. The below is from Mr. Steptoe’s 2012 Mediations in “Congo Square” by Whirlwind Press which he founded. 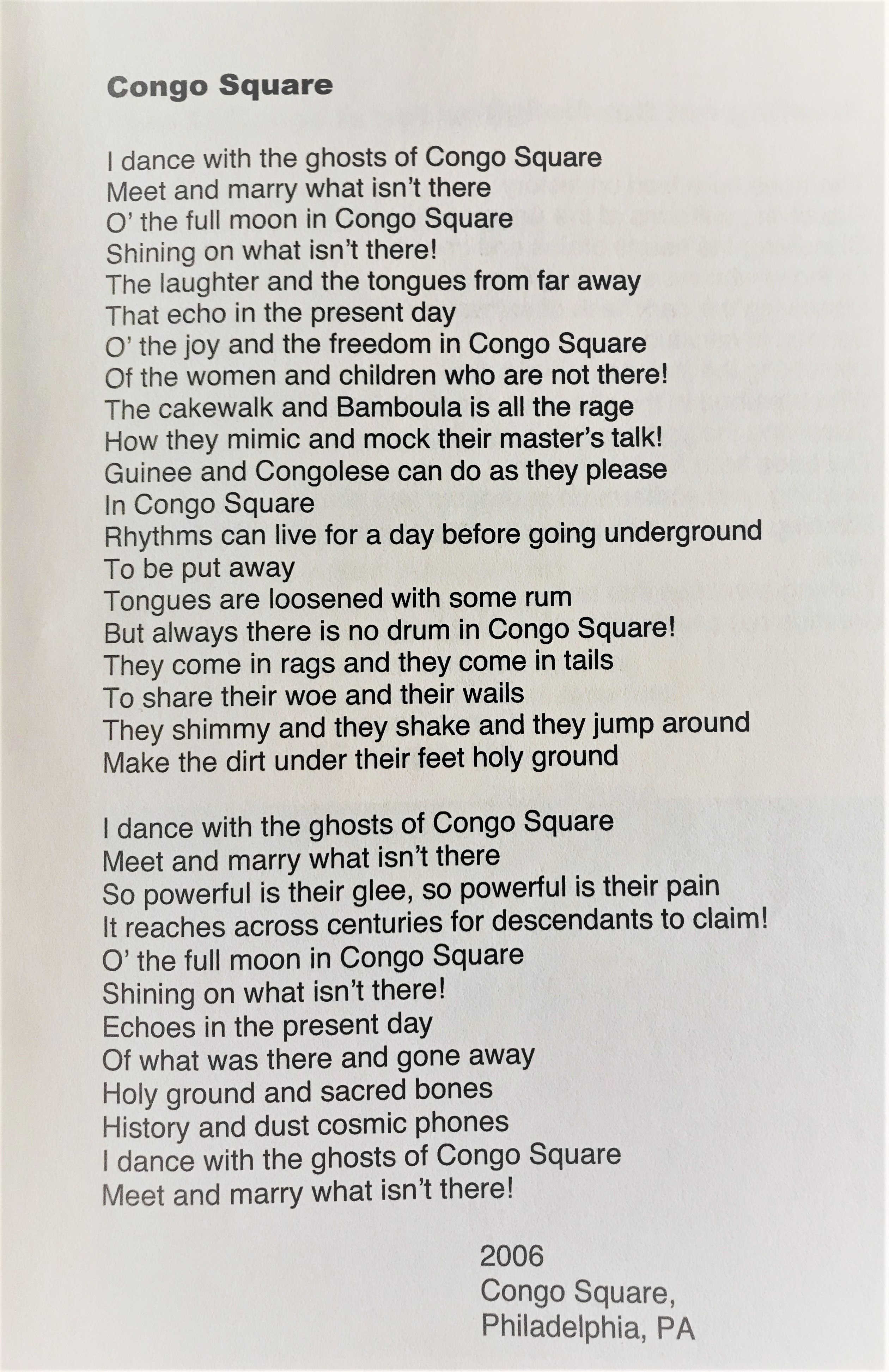 There were some Black men who armed themselves with guns to defend their ancestors. There are others who use just as powerful words to protect them. 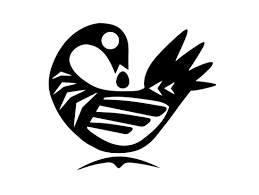 Forty-nine-year-old Sarah Field is buried at Bethel Burying Ground with four of her babies.

Ms. Field took in wash and ironing, while her spouse Abraham Field worked as a waiter. They lived on Christian Street between 8th and 9th Street in the Moyamensing District of the county. Both attended church services and belonged to a beneficial society, per the 1847 African American Census.

Ms. Field was forty-years-old when she delivered a stillborn son on April 11th in 1842. The child was buried at Bethel Burying Ground. There were 385 stillborn births in 1842 Philadelphia, according to the Board of Health.

The Fields lost a one-year-old daughter on August 14th in 1844. She was buried at Bethel Burying Ground. The child died of “Summer Complaint,” also known as Cholera Infantum which was severe diarrhea in young children that occurred during the warm and hot months of the year. The bacterial disease was transmitted through human feces in water, milk or unwashed hands. Death frequently occurred in three to five days. According to the Philadelphia Board of Health records, 262 children succumbed to the disease in 1844.

Seven-month-old Edward Field died on March 1st in 1851 of a ruptured blood vessel and was buried at Bethel Burying Ground with his brother and sister.

On March 12th in 1851, at forty-nine-years of age, Sarah Field died of “Bed Fever.” She had given birth to a son the day before who died the same day as his mother. Both were buried at Bethel Burying Ground with the other Field children. “Bed Fever,” also known as Puerperal Fever, was a bacterial infection contracted by a woman who has given birth. Consequently, “blood poisoning” or septicemia sets in and takes the life of the woman. Board of Health records show that forty-one Philadelphia women died of Puerperal Fever in 1851. The number seems low.

The high rate of stillbirths in this era is attributed to the lack of proper maternal nutrition and the possible infection of the fetus with Tetanus or lockjaw. This is transmitted by the mother through an infected umbilical cord. (A Biohistory of 19th-Century Afro-American by Lesley M. Rankin-Hill, p. 77.) 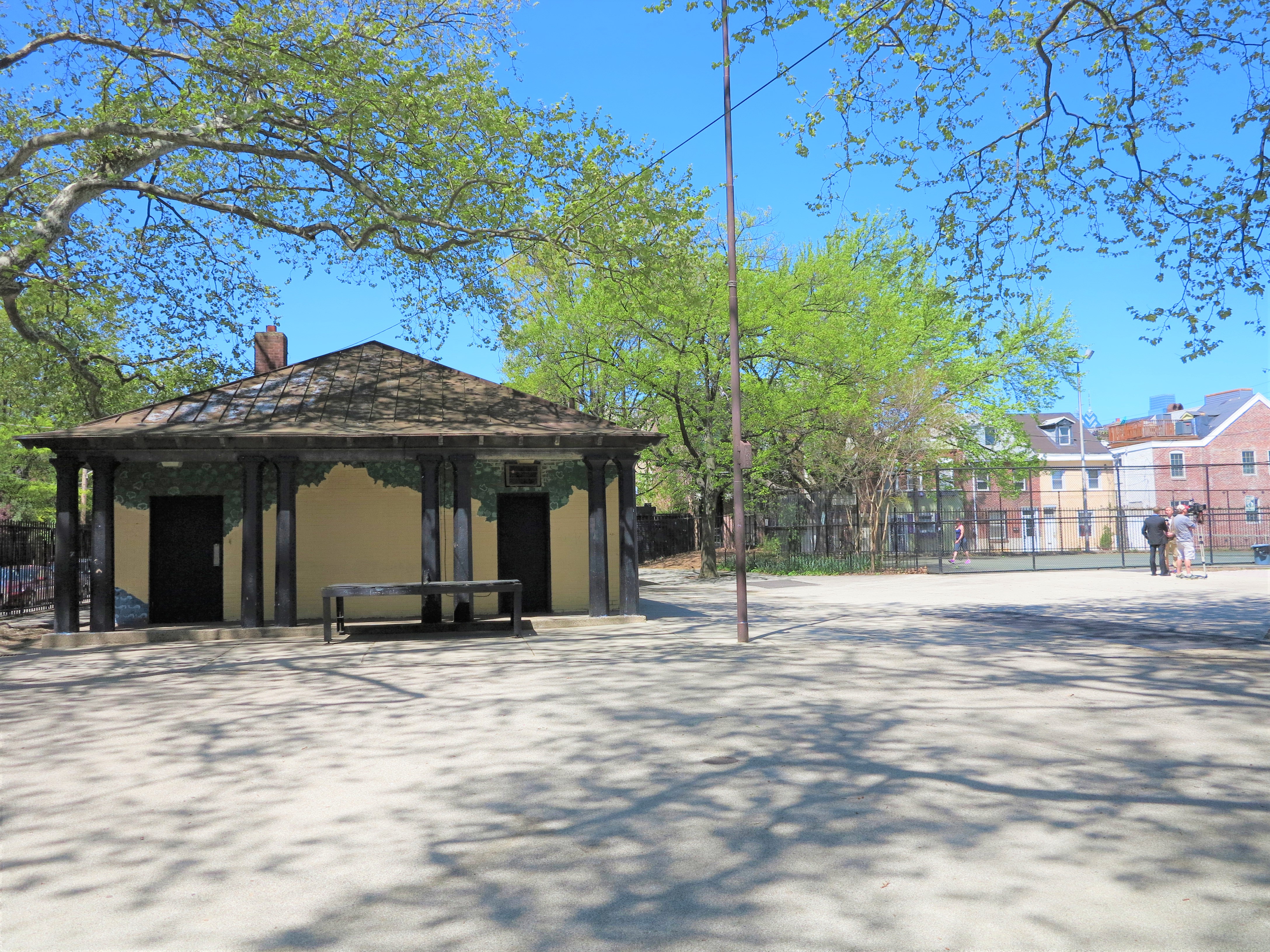 The human remains of Ms. Sarah Field and her four children continue to be interred at Bethel Burying Ground under the Weccacoe Playground. (Photo by WHYY) 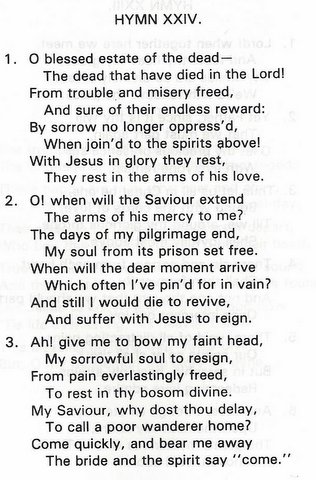 Bethel Burying Ground On This Date In History – May 24th. 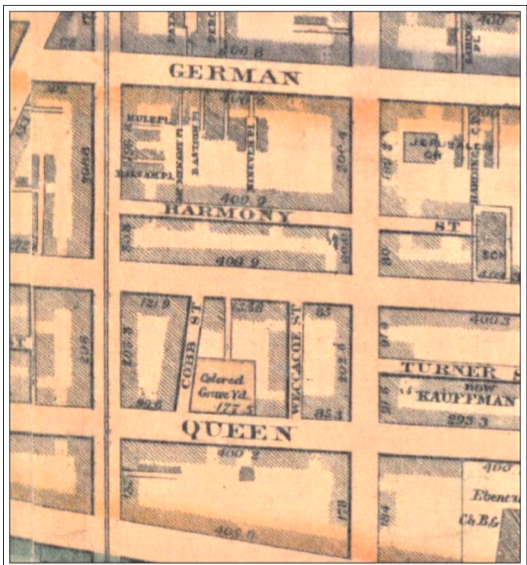 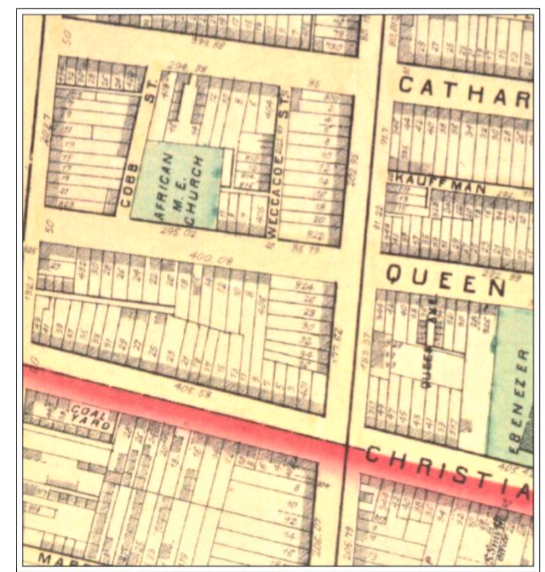 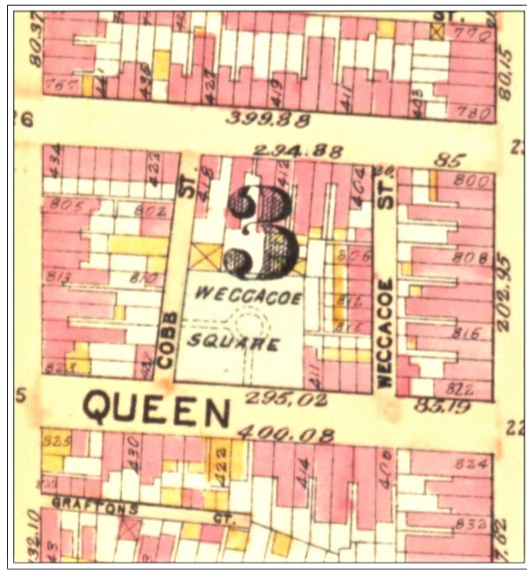 Check the link below for the updated Bethel Burying Ground Timeline.

The African American community in Philadelphia was constantly under the threat of violence from the racist mobs that controlled the city. The year 1853 was a particularly ugly time in the northern districts of the city and the county. The deadly assaults on Black men walking alone in these areas started a couple weeks before the 4th of July and continued through the rest of the year. The white-owned newspapers even lamented about the unprovoked brutal physical attacks in the Northern Liberties, Fairmount and Spring Garden sections of the county.

In October of that year, a funeral procession started out from the Northern Liberties District and was headed for the Bethel Burying Ground to inter an honored African American citizen, Mr. James Johnson Richmond. The procession was led by Mr. Richmond’s fellow Masons who carried the coffin on their shoulders for twelve miles to the cemetery followed by family and friends. The cortège was led by a marching band and the Masons in their formal uniforms followed by a “long line” of family and friends.

The procession was harassed all along the eleven-mile route and the situation quickly escalated into a running battle between the mourners and the white mob. A mile from the cemetery the gauntlet worsens with the arrival of more gang members at 6th and Chestnut Street. 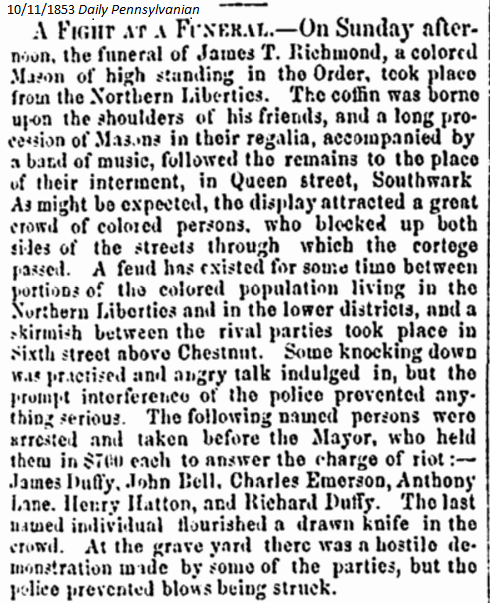 The latter half of 1853 was not only a time of heightening fears among whites in Philadelphia but throughout the country. In May the telegraph wires crackled with the breaking news that a large army of Black men, free and enslaved, were heading toward New Orleans to riot, rape, and pillage. The newspapers told the story of “half-crazed negroes” leading a “negro insurrection.” These rebels were goated on by abolitionists who were “depraved whites” creating a “negro mania.” Militias supposedly were called to arms to stop the wild horde. There was one problem. It never happened. There was no Black army, no insurgency and no army was rushing to the area. But that didn’t stop newspapers nationwide from speculating on the possible atrocities. What the hoax accomplished was the increase in tensions in the southern plantations and in the northern cities.

In the end, Mr. James Richmond, a waiter, lately of 417 N. 4th Street was laid to rest by his battered and bruised family and friends. But the threat of violence wouldn’t stop the long funeral procession from coming – day after day and week after week. 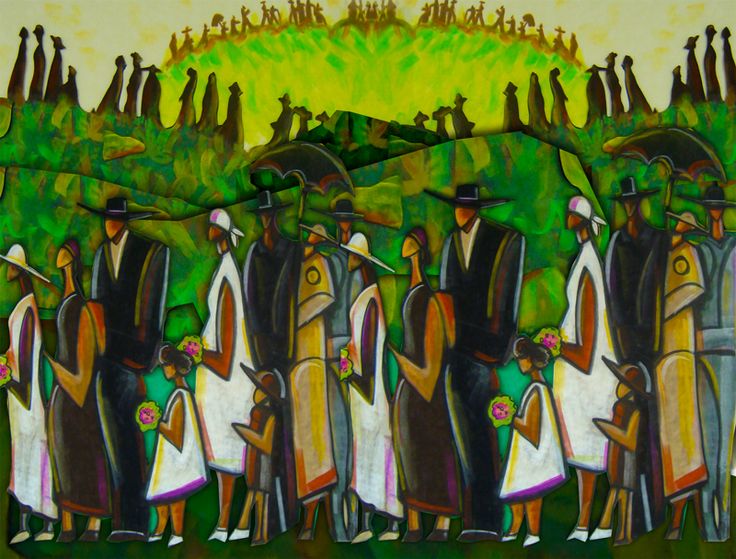 19th Century Healthcare for the Poor

The vast majority of those interred at Bethel Burying Ground were poor working class men and women who relied on the free clinics (dispensaries) for their family’s healthcare needs. These clinics were spread across the county and provided office visits and home visits if necessary. Below are links to better understand the system and the physicians who voluntarily provided their services.