Six-year-old Charles Edwards died this date, September 27th, in 1847 and was buried at Bethel Burying Ground.

Six-year-old Charles Edwards died this date, September 27th, in 1847 of Marasmus and was buried at Bethel Burying Ground. Marasmus is caused by starvation or a diet totally absent from necessary nutrition. Apart from weight loss, long-term effects of Marasmus in children include repeated infections. Diarrhea, measles, or respiratory infections are serious complications that can be fatal in a child with this illness.

The child’s parents were Ann  (32 years old) and Peter (37 years old). She was employed as a day worker and he was not employed at the time of his son’s death. Three years later in 1850, Mr. Edwards reported he then worked as a waiter. The Edwards also had a thirteen-year-old daughter, Maria, who assisted at home, according to the 1850 United States Census. The entire family lived in 9’x9′ room on School Avenue for which they paid $0.62 a week in rent, according to the 1847 Philadelphia African American Census. The degree of the family’s poverty is evident in that the Edwards owned only $15 in personal property, per the 1847 Census. 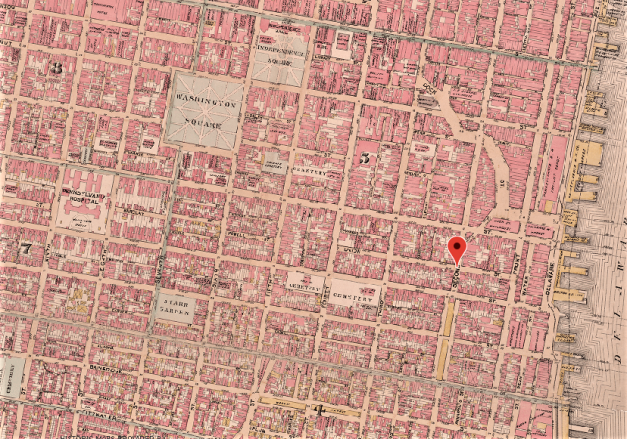 The Edwards’ home was near the intersection of 2nd and Spruce Streets, not far from the Delaware River wharves.

At the time of the internment of the Edwards’ child, Bethel Burying Ground was in bad shape. On November 10, 1847, the officials of the Philadelphia Board of Health agreed to notify Bethel Church officials that BBG was a public nuisance following complaints by neighbors and an inspection by Board members. “You are hereby notified, that in all future interments made therein, each body shall be deposited in the grave six feet in depth, and filled up with earth to a level with the proper surface of the ground; and that nobody shall be kept upon any part of the said grounds, or in any place appertinent and thereto, for a longer period than two hours previous to it being interred as above directed.” * It is difficult to explain the terrible condition of the small cemetery with the local AME bishop living across the street.**

Six-year-old Charles Edwards was buried on a clear September day where the temperature only reached 60 degrees by the late afternoon.

Note – an “Ann Edwards,” a Black woman, delivered a stillborn child on September 26, 1844. The child was buried in the “Colored” section of Union Baptist Cemetery, two blocks from BBG. I am unable to definitively determine if this is the woman that was also the mother of Charles.

*Philadelphia Board of Health Minutes for November 10, 1847.