One-year-old Emma Anderson died this date, January 17th, in 1854 and was buried at Bethel Burying Ground

One-year-old Emma Anderson died this date, January 17th, in 1854 of Pneumonia and was buried at Bethel Burying Ground. She lived with her parents Elizabeth (36) and George (36) at #3 Gray’s Alley. Emma had a nine-year-old sister Georgianna.  Both parents were born in Maryland while the children were born in Pennsylvania. George worked as a porter and earned $5 a week: approximately $125 in today’s currency. Elizabeth was a “day worker” and took care of the children.

The Gray’s Alley residence was a large tenement with 20 Black families living there as of the 1837 African American Census. The Anderson family lived in a 9’X9′ room for which they paid an estimated $3.00 a month ($75). The 1837 census taker reports that the residents of 3 Gray’s Alley are poor, but the building is not in as bad shape as 46 Spruce Street which is overrun by rats that attack the occupants and bite them in their sleep and eat their clothing. 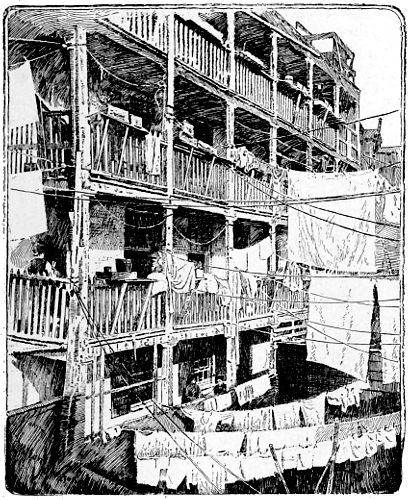 The rear of a 19th-century tenement.