Leven Thompson died this date, March 3rd, in 1824 and was buried at Bethel Burying Ground

Leven Thompson died this date, March 3rd, in 1824 and was buried at Bethel Burying Ground. His official cause of death was “Phrenitis” which is translated as “brain fever.” This fever could have been from one of a long list of possible illnesses such as bacterial or viral Meningitis, head trauma, alcoholism or lead poisoning. 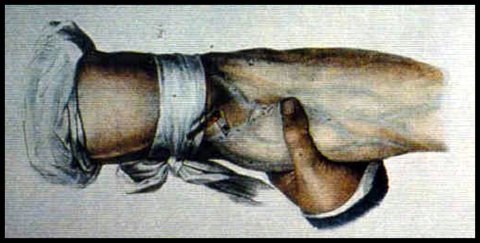 Mr. Thompson died at Pennsylvania Hospital and while he was there he would have received the standard treatment for his illness which was bleeding. This procedure commonly entailed the cutting into the median cubital vein at the elbow. Up to 20 oz. of blood was released at first and from then on more was released at the discretion of the physician who determined the proportionality of  blood taken to the “violence of the symptoms. The main instruments for this technique were called lancets and fleams. For more information on this procedure and its history go to http://www.bcmj.org/premise/history-bloodletting.