Thirty-year-old Mary Hicks died this date, February 28th, in 1823 and was buried at Bethel Burying Ground

Thirty-years-old Mary Hicks died of Puerperal Fever or “childbed fever” on this date, February 28th, in 1823 and was buried at Bethel Burying Ground. The disease is a bacterial infection of the female reproductive tract following childbirth or miscarriage. It usually occurs after the first 24 hours and within the first ten days following delivery. From the 1600s through the mid to late 1800s, the majority of childbed fever cases were caused by the doctors themselves. With no knowledge of germ, doctors did not believe hand washing was needed. (See http://en.wikipedia.org/wiki/Puerperal_infections.)

Ms. Hicks was seen by a doctor, Samuel M. Fox,  from the Southern Dispensary. It was one of the three free clinics in Philadelphia created in the early 1800s by wealthy citizens (“subscribers”) to treat the poor. Young doctors would donate their services to gain clinical experience. They visited the sick in their homes and would treat fractures, burns and extract teeth. The sick that could walk went to the Dispensary office to be treated where free prescribed medicines were also available. Smallpox vaccinations were dispensed and serious illnesses were referred to Pennsylvania Hospital for surgery. Indigent pregnant women were given the options of entering the hospital or home delivery where the doctor and possibly a midwife would attend. It appears that Ms. Hicks chose the latter. In all probability, it was the Dr. Fox who infected her with the germs that killed her. (Priscilla Ferguson Clement, Welfare and the Poor in the Nineteenth-century City: Philadelphia, 1800-1854, 145-146.) 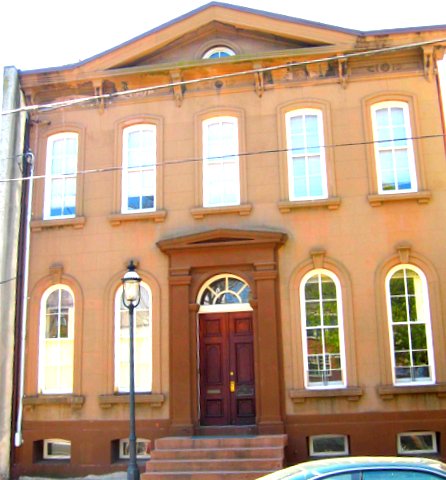 The building that housed the Southern dispensary is at 318 Bainbridge Street in the Southwark district of the city.