The sixteen-month-old daughter of Olivia and Adam Parker died this date, February 22nd, and was buried in Bethel Burying Ground

The infant daughter of Olivia and Adam Parker died this, February 22nd, of Tuberculosis and was buried in Bethel Burying Ground. It is unknown where the Parkers resided in 1837, however, several years later they were reported to live at 197 Lombard Street next to the New Market’s Head House Square. Beginning in the mid-1840s they apparently owned a home for many years at 3 Cobb Street directly across from the Bethel Burying Ground in West Southwark.

Mr. Parker was employed as a waiter and Ms. Parker took in washing and ironing according to the 1847 African American Census. In addition, the Census revealed that he was born in Maryland in 1801 and as of 1847 had real estate in his possession valued at $700 which was quite considerable. 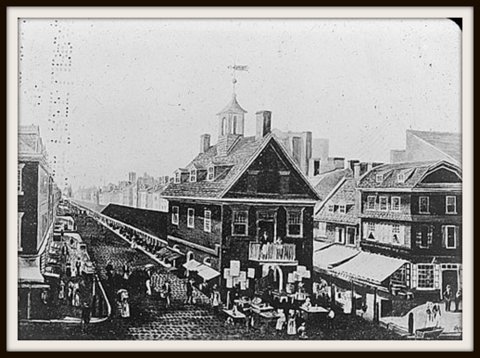 In 1837 the Parkers lived very close to the market sheds at “Second Street Markets.” It was also referred to as the “Shambles” which was an old English term for a meat market or a row of butcher shops, according to historian Harry Kyriakodis in his “Philadelphia’s Lost Waterfront.” The shed ran down 2nd Street from Lombard to South Streets and was open Tuesdays and Fridays from dawn to 2PM between April 1st and September and from dawn to 3PM during the winter months. For a complete history go to http://journals.psu.edu/pmhb/article/view/41413/41134.