Fifty-three-year-old Frances Paul died and was interred this date May 27th, in 1853 at Bethel Burying Ground.

Fifty-three-year-old Frances Paul died this date, May 26th, in 1853 of Typhoid Fever and was buried at Bethel Burying Ground on the 27th. The 1847 Philadelphia African American Census reports her occupation as cook. In 1847, she lived with her husband and five other females – one of which was a child and the remaining women were over 14 years of age. One of the females was reported as Lydia Paul, age 24 and born in Pennsylvania. She likely was a daughter of Thomas and Frances Paul. Thomas Paul was sixty-seven years old and was employed as a laborer in 1847.

The other people living at 245 South 7th Street were occupied as dressmakers and a laundress. Mr. Paul was born enslaved as were two other residents. Two gained their freedom by manumission and the third by “limit.”* I don’t believe Ms. Frances Paul was one of those born into enslavement since her birthplace was New Jersey. It is possible, but unlikely.

The census sheet from 1850 shows the three Paul family members (in the red box) residing with six others who are likely boarders. 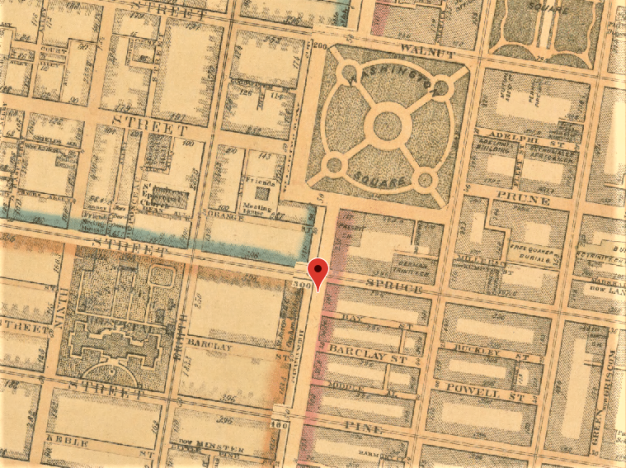 The red pin indicates the approximate location of the Paul family residence between Washington Square and Pennsylvania Hospital.

Frances Paul’s community on south 7th Street in 1847 was a crowded neighborhood. Approximately two hundred Black men and women on two blocks along south 7th Street were employed as seamen, waiters, milliners, laundresses, barbers and coachmen. Ms. Paul was stricken with Thyroid Fever from drinking polluted water. It is likely that the local hand pumps brought up water contaminated with human waste leaked from overflowing cesspools. The disease also would have affected the entire neighborhood.

The individuals inflicted with the disease would suffer for weeks or months before they died or survived the infection. In 1852 through 1853 two-hundred eighty-eight Philadelphians died of Tyhpoid Fever. Another nine-hundred twenty-two died of Dysentery, a symptom of Typhoid Fever.

Ms. Frances Paul succumbed to her disease on a clear day in late May of 1853. Her loving family buried her at Bethel Burying Ground.

*By the use of the term ‘limit’ I take it to mean that the years of enslavement were limited to a number of years set down in the will or a legal declaration of the enslaver.