Fifteen-month-old Samuel Lee died this date, March 1st, in 1840 and was buried at Bethel Burying Ground.

Posted by Terry Buckalew on March 1, 2020
Posted in: Uncategorized. 1 Comment

Fifteen-month-old Samuel Lee died this date, March 1st, in 1840 of Catarrh Fever and was buried at Bethel Burying Ground. ‘Catarrh’ referred to inflammation of the air passages. Death likely was due to pneumonia. The child’s parents were William and Sarah Lee. William was 37 years old and was born in New Jersey.  Sarah was 36 years old and was born in Pennsylvania, according to the 1850 U.S. Census. They had two other children, Elisabeth (7y) and William, Jr. (5y), at the time of Samuel’s death.  Both were born in Pennsylvania. 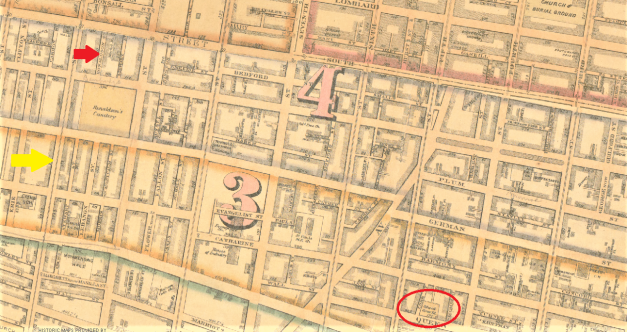 When the Lee family lost baby Samuel, they lived on Tenth Street below Fitzwater (yellow arrow). The family of five would have been living in one room, paying approximately $3 a month in rent. William, Sr. worked as a porter and likely earned around $5 a week. Sarah Lee was self-employed, taking in washing and ironing, and may have made $1-$2 a week, depending on the business. The red arrow illustrates the location of the family in 1847 on Ronaldson Street. The red circle marks the location of Bethel Burying Ground.

According to the 1847 Philadelphia African American Census, the family was doing comparatively well financially. Their personal property was valued at $500 or $15,700 in modern currency. They were also paying $8 a month for rent which was comparatively extremely high and may mean that they were renting an entire rowhouse. 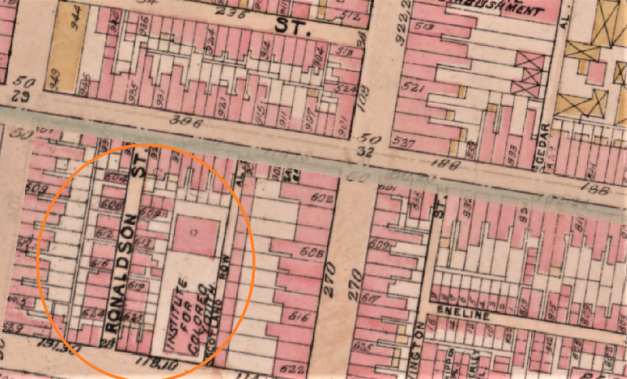 Ronaldson Street was next to the renowned Institue for Colored Youths, illustrated by the orange circle. (1)

In the 1840s Ronaldson Street, along with Rodman Street and Washington Street, was on its way to becoming well known for its “neat and genteelly furnished three-story brick houses owned and occupied . . . almost entirely by colored people.”(2) In 1847, Ronaldson Street was home to the Black middle class. On the same block as the Lee family were two Black ministers. Rev. Benjamin Templeton was pastor of the Presbyterian mission church in St. Mary’s Street and the Rev. Jeremiah Durham of Bethel African Methodist Episcopal Church. Both men were highly respected in the Black communities.

The race riots in Philadelphia during the 1800s are well-known. The daily street attacks on Black men, women, and children are not as well known. On December 13th in 1847, there was a vicious attack on Ronaldson Street that was clearly an assassination attempt. Rev. Benjamin Templeton was walking to his church to hold his weekly Sunday worship service. Every Sunday for the last several years, he walked the same path to attend to his congregation. On this Sunday morning, he was attacked by three men and received severe head injuries after being assaulted with paving stones. The newspapers reported that the attackers were members of the Moyamensing Hose Company, a volunteer fire company known for its relationship with the local gang called the Killers. The police arrested a man who was later released. No one was ever charged with this crime. Rev. Templeton returned to his duties after a long convalescence. (3/4)

Fifteen-month-old Samuel Lee died on a clear day in early March where the temperature at sunrise was 31 degrees and only rose to 35 degrees during the day.

These are three panels are from a quilt made by Harriet Powers, an enslaved woman and folk artist from Georgia.

(1) The Institute for Colored Youth was founded in 1837 in Philadelphia, Pennsylvania, United States. After moving to Delaware County, Pennsylvania, and changing its name to Cheyney University, it continues as the oldest African-American school of higher education.

(2) Still, William, A Brief narrative of the struggle for the rights of the colored people of Philadelphia in the city railway cars (1867)

One comment on “Fifteen-month-old Samuel Lee died this date, March 1st, in 1840 and was buried at Bethel Burying Ground.”