The ten-month-old son of Thomas Miller died this date, October 14th, in 1849 and was buried at Bethel Burying Ground.

The ten-month-old son of Thomas Miller died this date, October 14th, in 1849 of Hydrocephalus and was buried at Bethel Burying Ground. Mr. Miller worked as a hod carrier, now known as a brick carrier. The 1847 Philadelphia African American Census is the only census information we have on the Miller family. It appears the deceased child had two brothers under five-years-old. 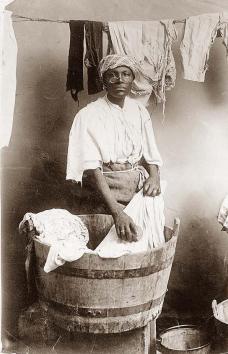 We don’t know Ms. Miller’s first name because the family is not recorded in the 1850 U.S. Census. The reason for this may be that the family changed residences during this period from #25 Prosperous Alley to #18 Burd’s Court. Both were near the southern border of the city. The 1847 Census reported Ms. Miller was employed as a washerwoman. Undoubtedly, the Black families in 19th century Philadelphia would have “been reduced to utter destitution had it not been for the labor of the mother as a washerwoman.” Almost 50% of the working Black women in 1849 were “engaged in washing and ironing or day work.”*

Washing clothes for a living was a job that taxed body and spirit. Water had to be drawn and carried from the nearest hydrant, firewood had to be obtained, fires had to be started and heavy bundles of clothes had to be picked up and returned to her customers after the clothes and sheets were hung up, dried and folded. All this in the wilting heat and freezing cold, while taking care of children, shopping for and preparing the family’s meals, and, on occasion, while pregnant. It was an undertaking for only the strong and strong-willed.

At some time during 1850, the Miller family moved from Prosperous Alley (yellow arrow) to Burd’s Court (red arrow).

A survey of Philadelphia newspapers of the era shows that Prosperous Alley had become a high crime rate area and also had more incidents of death from contagious diseases. While Burd’s Court, only a city block away, appeared to be a more stable living environment. This may have influenced the family’s move. 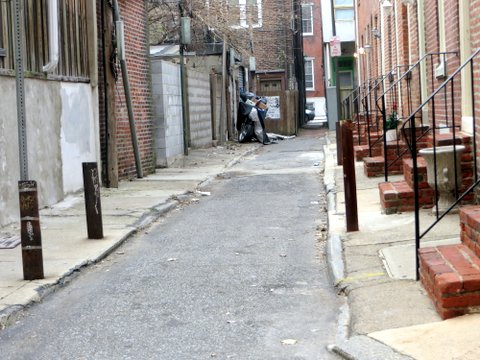 The above is a current view of Burd’s Court now Adler Street looking south. It runs from Locust Street to Spruce Street between 10th and 11th Streets. That is Spruce Street in the distance. (Photo by T. Buckalew)

The Millers lost their son on a sunny Autumn day with the temperature in the low 50s with a light northern breeze. He was buried at Bethel Burying Ground.