The two-year-old unnamed daughter of Patrick Butler died this date, October 4th, in 1848 of Intestinal Tuberculosis and was buried at Bethel Burying Ground. The 1847 Philadelphia African American Census reports that the Butler family consisted of two males and three females. There were two children under five years old and three individuals between the ages of 15 and 50 years of age.

Mr. Butler was employed as a waiter, earning $4 a week, while Ms. Butler worked as a laundress, likely earning between $.50 and $1.50 a week. Her first name is not known to us because it appears the family may have left the city by the time of the 1850 U.S. Census.

The Butler family lived at #8 Emeline Street for which they paid approximately $5.75 a month in rent. This amount is very high for one room so it appears they either rented several rooms or the whole house. Emeline Street was located between South and Bainbridge Street and 8th and 9th Streets in the Moyamensing District of the county.

Emeline Street was a short, narrow thoroughfare that was crowded beyond its limits with African American families. The street was home to forty-six families, totaling one hundred seventy-one men, women and children. The adults were employed in jobs that serviced the well-off white families in the area and at the stores they frequented. Emeline Street was the address of carpenters, coachmen, private waiters, barbers, dressmakers, seamstresses and “Ladies Maids.” Half of the families lived in shelters in the rear of the houses that faced the street. Interestingly, the census taker for the 1847 Philadelphia African American Census commented that the families that did not live in the shanties were “doing well.” He or she had no comment on those in the shacks and the converted animal stables in the backyards.

Emeline Street has an awful place in Philadelphia history. It is stated that there was never a lynching of an African American in Philadelphia. That is because the white mobs would either shoot or beat to death their Black victims. This was the case on October 10, 1871. Musician Isaac Chase, thirty-four, had the gall to try to vote at his polling place when a gang of Irish thugs chased the young man back to his home at 811 Emeline Street. Chase made it inside but his front door was kicked opened. In front of his spouse and children, Samuel was shot in the head and killed. Teacher and civil rights activist O.V. Catto was also murdered later that day near the home of the Butlers. 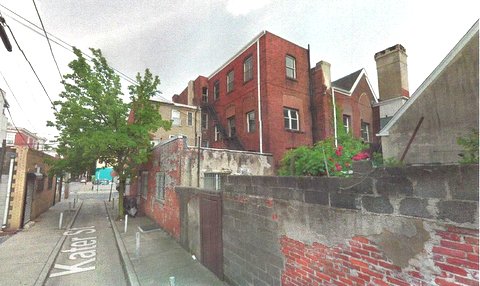 The Butler’s two-year-old daughter died on a “fair” October day where the temperature rose to 66 degrees from a sunrise temperature of 56 degrees. Her parents buried her at Bethel Burying Ground.