Sixty-year-old Joseph Furrow died this date, September 1st, in 1853 and was buried at Bethel Burying Ground. 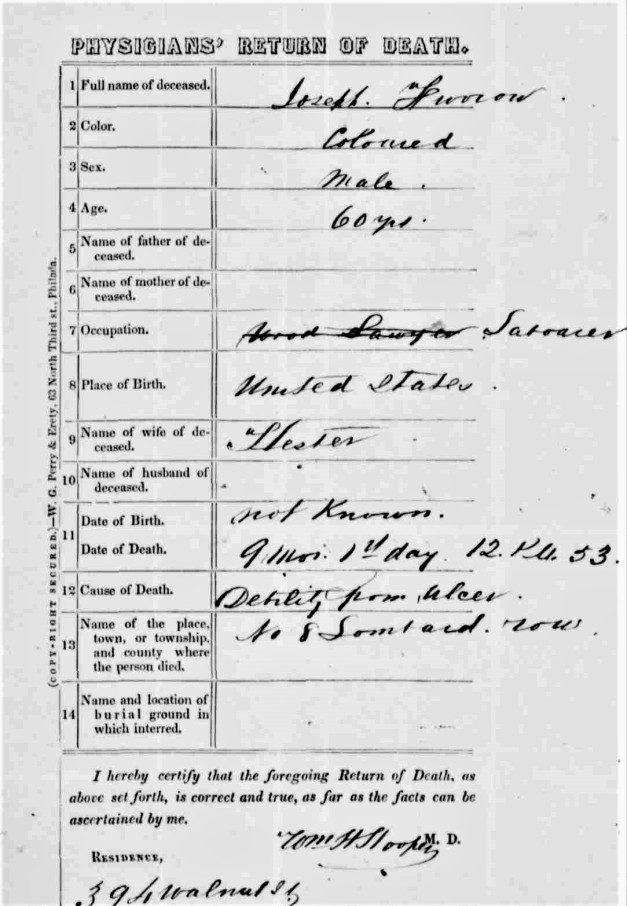 Sixty-year-old Joseph Furrow* died this date, September 1st, in 1853 of “Debility from Ulcer” and was buried at Bethel Burying Ground. Mr. Furrow was formerly enslaved. His freedom was purchased for $375, according to the 1847 Philadelphia African American Census. In the 1850 U.S. Census, Mr. Furrow reported that he did not know what state in which he was born. The low $375 amount likely reflects that he was a child at the time of his liberation. Mr. Furrow was employed as a huckster and laborer during his life in Philadelphia.

Mr. Furrow was widowed shortly before his death. In the 1850 Census, his spouse Hester Furrow was alive. However, Mr. Furrow’s death certificate mentions that Ms. Furrow was deceased. She is most likely buried at Bethel Burying Ground but there isn’t a death certificate available for her. In 1850, she was fifty-seven-years-old and was employed as a domestic. Also listed in the family was seven-year-old Cornelia Furrow and four-year-old James Furrow. It appears that they were grandchildren. Tragically, James would die of Tuberculosis in December of 1852 and be buried at Bethel Burying Ground. His parents were reported as Arnold and Pleasant Furrow and they lived at Joseph and Hester’s address. The young couple was not listed with the family in the 1850 Census.**

The red pin illustrations the location of Bethel A.M.E. Church and nearby Lombard Row (red arrow), the residence of the Furrow family.

The Furrow family lived in a single room at #8 Lombard Row, a very narrow thoroughfare, located between 7th and 8th Streets off of Lombard Street. The Furrows paid $2.60 a month in rent, according to the 1847 Census. In 1847, there were fourteen Black families living on Lombard Row with a total of sixty-one family members. They were employed as waiters, cooks, laborers, and domestics. Fourteen of the sixty-one were reported to be formerly enslaved.

Above is an undated photo of Lombard Row (now South Perth Street). Below is a current photo. 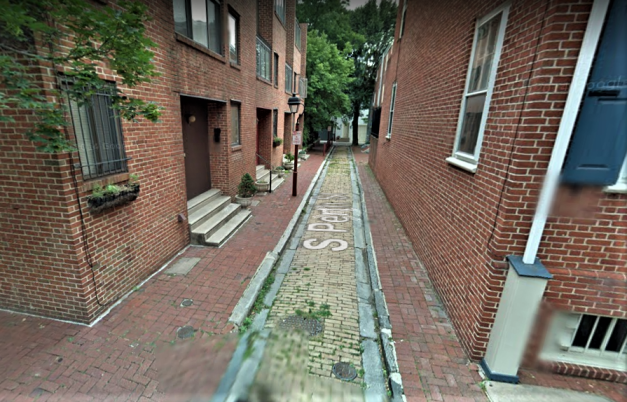 Mr. Furrow died at home on a cloudy overcast day in early September where the temperature rose to 84 degrees in the afternoon. His family interred him at Bethel Burying Ground.

*The last name is spelled “Furrah” in the 1850 U.S. Census. The 1847 Philadelphia African American Census, the death certificates, and all the city directories report the spelling as “Furrow.”