Four-year-old Maria Britton died this date, July 8th, in 1847 and was buried at Bethel Burying Ground.

Four-year-old Maria Britton* died this date, July 8th, in 1847 of lung disease and was buried at Bethel Burying Ground. She was the daughter of Charlotte and Peter Britton. Ms. Britton was twenty-two-years-old at the time of her daughter’s death. Mr. Britton was thirty-two-years-old. Ms. Britton was born in Maryland, while Mr. Britton was born in Cape Verde Islands, according to the 1847 Philadelphia African American Census. In addition to young Maria, the Brittons had a two-year-old son, Robert, and had a daughter Emma who was born two years later in 1849. Both children were born in Pennsylvania, according to the 1850 U.S. Census. In both censuses (1847 & 1850), Mr. Britton reported his occupation as “seaman.” Ms. Britton was employed as “days worker” in the 1847 Census.

The red pin indicates the approximate location of the Brittons’ residence at 227 Lombard Street. The red arrow indicates the location of Bethel A.M.E. Church where they worshiped. The family paid $1.50 a month for a 10’X10′ room. Mr. Britton likely was paid $4-$5 a month as a seaman. Ms. Britton possibly would earn $0.50-$1.00 a week. 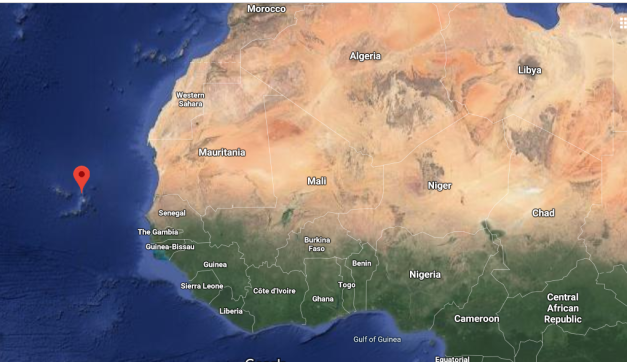 Peter Britton reported to census takers that he was born in the Cape Verde Islands, now know as Carbo Verde. The red pin indicates the country’s location off the west coast of Africa.

“The Cape Verde islands are situated 350 miles off the West Coast of Senegal . . . The islands were first settled by the Portuguese in the mid 15th century, they were uninhabited at the time. The Portuguese wanted to set up plantations, modeled on what they had done in the Algarve region of Portugal, so they brought West African slaves to the Cape Verde islands to cultivate the land, but because of this arid climate, they weren’t very successful at it. But nonetheless, the large African population intermingled with the fewer numbers of Portuguese, to create a completely new culture and society—Cape Verdean Creole.”

Cape Verdeans came on whaling vessels to the United States as early as the late 1700s.

“The Cape Verde islands were a stopping off point for the whaling industry. Vessels, mainly from New Bedford, Massachusetts, would make regular stops at the Cape Verde islands for supplies and for salt. When whaling went into decline in the latter 19th century, the whaling captains were having trouble finding crew for their ships. They tended to hire a diverse group anyway, but young Yankee seamen were no longer interested in serving. So when they would stop at the Cape Verde islands, the young men of the islands, who were so eager to find any means of survival, that they just seized the opportunity to work on these whaling vessels.”

Four-year-old Mary Britton died on a day that was alternately cloudy and clear with the temperature rising to 88°. Her parents buried her at Bethel Burying Ground.