Forty-five-year-old Mary Polk died this date, May 25th, in 1850 and was buried at Bethel Burying Ground. 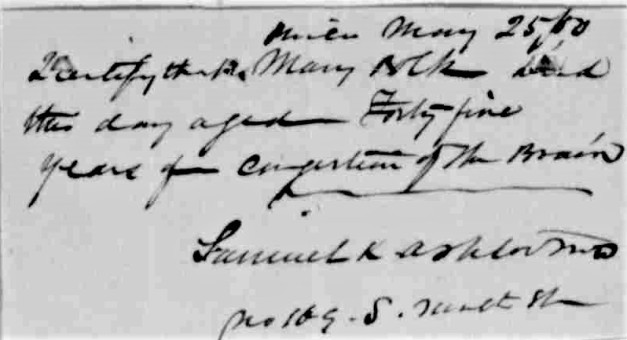 Forty-five-year-old Mary Polk died this date, May 25th, in 1850 of “Congestion of the Brain”* and was buried at Bethel Burying Ground. Ms. Polk was the head of her family and was able to participate in the 1850 U.S. Census before she died. In this census, she did not report an occupation, probably because she was so ill. In the 1847 Philadelphia African American Census, she listed her occupation as wash woman earning $75 a year.

At the time of her death, her children were as follows: Caroline (18 years old) who worked as a wash woman, William (16) who worked as a barber’s apprentice and Richard (13) who attended the 6th and Lombard School. All the children were born in Pennsylvania. Ms. Polk was born enslaved in Virginia. I could find no reference to a spouse. 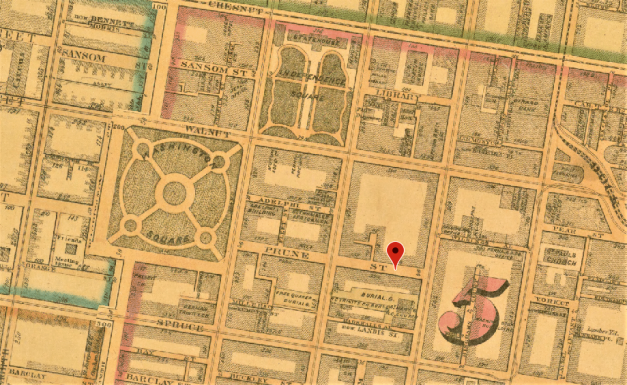 The Polk family resided in the rear of #11 Prune Street now, 411 Locust Street (Red pin above).  The address is a block from Washington Square and two blocks from Independence Hall. Their home was likely a shed or converted stable for which they paid $3 a month. The breadwinners in the family were bringing home approximately $1.50 each a week, according to the 1847 Census.

Ms. Polk escaped slavery in Virginia and sought refuge in Philadelphia. In her time in the city, she had to survive six major riots and the endless threat of street assaults by white thugs. Ms. Polk was one of the Black Philadelphians who historian Gary B. Nash observed that while they could not “hold back the storm of racial hatred,” they could fight back “by strengthening their own neighborhoods and community.” Ms. Polk was a long time member of Bethel African Methodist Episcopal Church and a contributing member of African American beneficial societies, according to the 1847 Census.

The Polk children buried their mother at Bethel Buying Ground on a rainy day in May where the temperature rose to 54 degrees.

*”Congestion of the Brain” is a meaningless term. Ms. Polk may have died from anything from a stroke or meningitis to head trauma.