Fifty-two-old Charles Hall died this date, May 14th, in 1849 and was buried at Bethel Burying Ground.

Fifty-two-year-old Charles Hall died this date, May 14th, in 1849 after suffering a seizure caused by “Intemperance.” According to the 1847 Philadelphia African American Census and the 1849 Philadelphia City Directory, Mr. Hall was employed as a chaise drive and worker in a livery stable.

A chaise was the mid-19th Century version of a taxi cab. Information from the 1847 Census, indicates that Mr. Hall owned his own chaise and horse.

The 1847 Census material on Mr. Hall shows that he was the head of a family of nine. In addition to Mr. Hall, there were four other males and four females, two were between five and fifteen years of age and three were under five years of age. All with the exception of one (likely Mr. Hall) were born in Pennsylvania. One other adult male also worked in a livery stable.* Two adult females were employed as a teacher and a domestic.

The red pin indicates the location of the Hall family house in the 1700 block of George Street now Sansom Street. The family paid a hefty rent for their house at $27 a month or $880 in present-day currency. The black arrow indicates the location of a large livery stable where family members may have been employed or even owned.  According to the 1847 Census, the Halls were a successful business family with a reported $600 in personal property or approximately $20,000 in present-day currency.

According to Board of Health documents, Mr. Hall was one of eighty Philadelphia men and women in 1849 whose death was directly related to alcoholism or intemperance as it was called during that period. In the Black community, alcohol use took on more than a social problem but also a political one. Black religious and civil leaders preached that alcohol stood in the way of African Americans achieving equal rights with whites. In their belief, the cessation of alcohol use would absolutely prove to whites that African Americans were worthy of equality and put Blacks on an equal footing. They preached that drunkenness was a sign of moral weakness and brought with it disease, poverty, crime, and violence. Proponents of this philosophy believed that sober Black people would make successful business entrepreneurs and then whites would have to automatically accept Blacks as the equals to them. 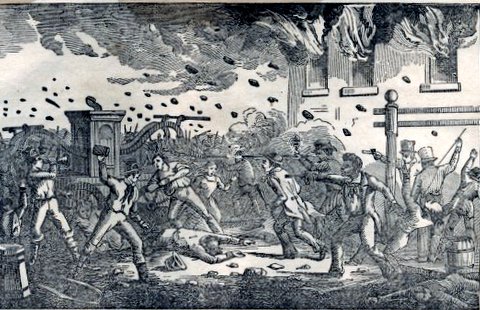 In August 1842 one of the large Black temperance societies was parading through the city to celebrate its cause and culture. They were ambushed by a larger mob of violent Irish gangs. “The Lombard Street Riot” ended three days later with many African Americans killed and injured, while many fleed the city. The 1847 Census shows that one member of the Hall family belonged to a temperance society. Was this Charles Hall? How was the Hall family affected by the riot?

Mr. Hall died after a night of heavy rain. The Hall family buried their patriarch on a windy and chilly Spring day where the temperature rose to 55 degrees.

*The 1850 Philadelphia City Directory shows a Mr. John Hall, chaise driver, at the same address as the deceased.