Forty-nine-year-old Sarah Darrah died this date, August 23rd, in 1850 and was buried at Bethel Burying Ground.

Forty-nine-year-old Sarah Darrah died this date, August 23rd, in 1850 of Apoplexy (stroke) and was buried at Bethel Burying Ground. She lived with an older woman who was crippled from strokes and relied on Ms. Darrah as a caregiver, according to the 1847 Philadelphia African American Census. Ms. Darrah was born in Delaware and earned a living as a laundress in 1847 and a “whitewasher” or house painter at the time of her death in 1850. She had lived in Philadelphia for approximately thirty years. 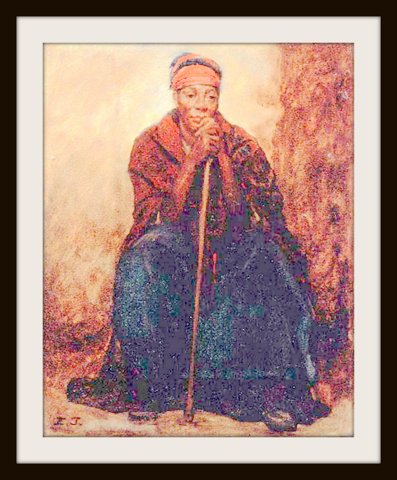 Ms. Darrah was a widow. Census records identify her deceased spouse as Tilghman Darrah who worked as a porter. The 1840 Federal Census reports that they had a daughter who was between 5-10 years of age. There are no city death records available for either individual. One or both may have been buried at Bethel Burying Ground.

Ms. Darrah lived in a single small room at 70 Union Street, now Delancy Street, with her roommate for which they paid $1.25 a month. The physically disabled woman, for whom Ms. Darrah was caring, was receiving public aid that included some firewood in the winter and a small amount of groceries, according to the 1847 census.

Ms. Darrah was a long time member of Bethel AME Church and belonged to a beneficial society that may have paid her burial expenses.  She was interred on a clear August day where the temperature reached a high of seventy-eight degrees by 3 p.m.