Eighteen-month-old Mary Jane Coursey died this date, June 13th, in 1854 of “Convulsions” and was buried at Bethel Burying Ground. The convulsions were only a symptom of the underlying disease that afflicted the child. Mary Jane could have suffered from a high fever, epilepsy or meningitis that all would have caused convulsions. Likely, the convulsions were from teething considering the child’s age. Nineteenth-century medical reports state that infants were more prone to disease at the time of teething.  Often, teething was reported as a cause of death in infants. Perhaps they became susceptible to infections when lancing was performed. Another explanation of teething as a cause of death is that infants often were weaned at the time of teething; perhaps they then died from drinking contaminated milk, leading to an infection, or from malnutrition if watered-down milk was given.

In 1854, Mary Jane Coursey was one of the 151 children in Philadelphia between 1-2 years old that died from “convulsions.”

Mary E. and John W. Coursey, ages 18 years and 22 years respectively, were the parents of the young child. Mr. Coursey was employed as a waiter and Ms. Coursey worked at home. It appears from the 1850 Federal Census that the deceased child had a twin, John W., Jr. It seems that Ms. Coursey was either pregnant or had just given

birth to another child (Ellen M. ) around the time of Mary Jane’s death. Mr. Coursey was born in Maryland, while all the other family members were born in Pennsylvania, according to the Census. 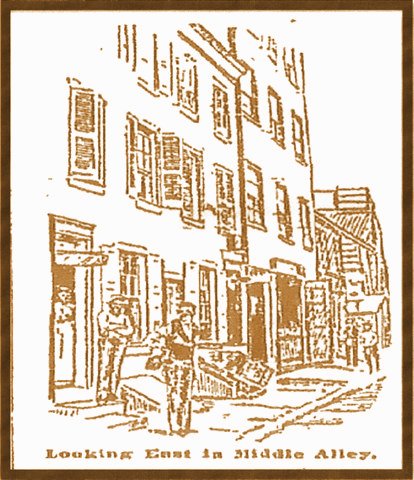 The family lived in Middle Alley which had the infamous reputation of having some of the worst housing in the city. The greasy cobblestoned thoroughfare of rickety, vermin-filled, firetrap wooden houses ran from 6th to 7th Streets and between Spruce and Pine Streets. The alley was home to the poor and destitute – Black and white. In June of 1854, a nearby street similar to Middle Alley was reported to be entirely covered in two feet of garbage. (Public Ledger, 20 June 1854)

Little Mary Jane Coursey was buried on a hot humid afternoon on June 14, 1854. At noon, the thermometer stood at 84 degrees with cloudy skies. Within two days, the temperature would rise to the mid-90s.