The twenty-month-old daughter of the Hazzard family died this date, October 24th in 1847, and was buried at Bethel Burying Ground.

The twenty-month-old daughter of Joanna Liveley Hazzard and Isaac Hazzard died on this date, October 24th in 1847, of Tabes Mesenteric and was buried at Bethel Burying Ground. Ms. Hazzard was employed as a day worker and Mr. Hazzard was a seaman who also worked occasionally as a laborer in a Delaware River boatyard where he was paid $5 a week. The family lived in a 10’X 10′ room at 179 South 6th Street within the shadow of Independence Hall. They paid $3.50 a month for rent, according to the 1837 and 1847 Philadelphia African American Censuses.

To work as a seaman, Mr. Hazzard would have had to obtain a “Seaman’s Protection Certificate.” These were issued to American seamen during the last part of the 18th century through the first half of the 20th century. These papers provided a description of the sailor and showed American citizenship. All it took to be certified was a witness to attest to the applicant’s identity. Black men were allowed to vouch for other Black men. It has been mentioned that fugitives from enslavement were able to get “freemen papers” this way and exit the country.** 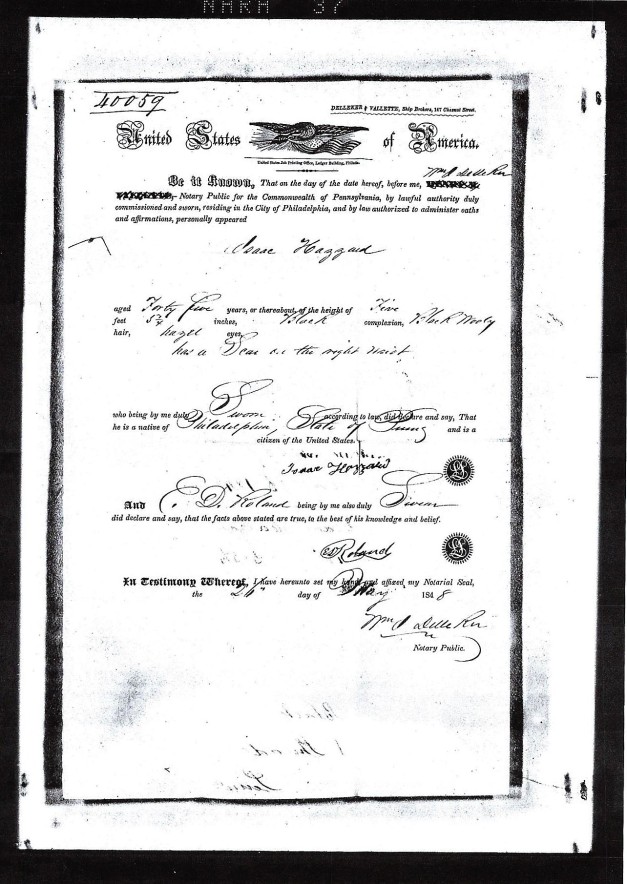 Mr. Hazzard was 5′ tall with hazel colored eyes, a dark complexion and an identifying scar on his right wrist.

The Hazzard family lived in the block just north of Independence Hall now known as Independence National Park. Below is a photo of how it looks today.

The buildings that had been on the block were torn down beginning in 1949. Below is a photo of the buildings in the Hazzards’ neighborhood being demolished.

*Tabes Mesenterica is a progressive wasting of the intestines marked by anemia, dramatic swelling of the abdomen, diarrhea, fever, and pain.