Eighty-nine-year-old Ellen Waters died this date, February 10th, in 1849 and was buried at Bethel Burying Ground

Eighty-nine-year-old Ellen Waters died this date, February 10th, in 1849 of “old age” and was buried at Bethel Burying Ground.

It is difficult to even remotely imagine what Ms. Water’s life was like. She was born into slavery before the American Revolution and self-reported that she was manumitted by her “mistress.”(1) Now at the time of her death in her 90th year of life, she lives in squalled poverty in one of the poorest and violent neighborhoods in the county.  A neighborhood where the white gang the “Killers” roam the area with impunity attacking and killing African American like they are some sort of animal to be hunted. (2)

A neighborhood where every year on March 27th the annual “Fireman’s Parade” would provide an opportunity for white drunken racists to rampage through the streets of Black neighborhoods attacking it citizens.(3)

Ms. Waters lived in Shanty #2 at 67 Bedford Street near the intersection of 7th and South in the Southwark District. She was fortunate enough to live in the 12’x 12′ shack rent free because it was owned by her grandson who apparently lived there also. He worked as a clerk in a second-hand clothing store. It appears she worked as a laundress. (1)

We may read the few isolated facts present by the public records but we will never truly understand. 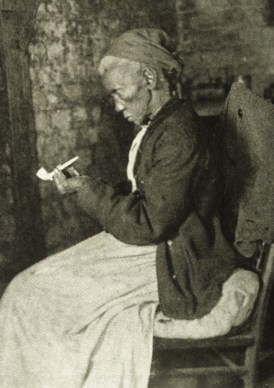 Photo is of a 19th Century African American woman. Her name was not recorded.

Note: The 1837 African American Census records that Ms. Waters is a widow and worshiped at Bethel A.M.E. Church.