The two-hour-old Tate child died this date, January 26th, in 1847 and was buried Bethel Burying Ground

The newborn infant of Margaret and Arthur Tate died this date, January 26th, in 1847 of “Debility” and was buried at Bethel Burying Ground. The Tates lived at 229 Lombard Street and he was employed as a porter no doubt working on the docks and or the large open market shed that was only feet from his front door. Ms. Tate was a homemaker taking care of four other children four boys and a girl according to the 1850 Federal census. The Tates lost two of their sons, Francis and James. Both of their biographical sketches are on this website. All of the children were buried at Bethel Burying Ground.

Soon after the death of the Tate infant, Arthur became the Sexton of Bethel Church. He replaced Sheperd Gibbs. One of his responsibilities would have been the management of the burial ground in which his children were buried. As we can see from the document below Mr. Tate was highly thought of in the Black community and was very involved in his church. 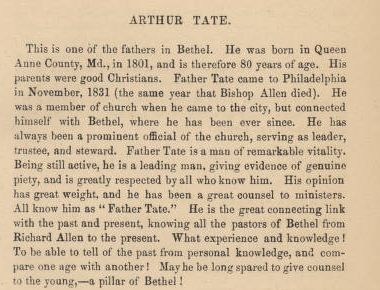