Fiftey-nine-year-old Charles Davis died this date, June 15th, in 1854 and was buried at Bethel Burying Ground

Fifty-nine-year-old Charles Davis died this date, June 15th, in 1854 of “Congestion of the Liver,” which is commonly associated with Congestive Heart Failure. Born in Frederica, Delaware he worked as a porter in Philadelphia for most of his adult life. He lived with his spouse, Rachael Molezton Davis, at 237 South 7th Street directly across from Washington Square. It is highly likely that Ms. Davis was a live-in domestic to the family that lived at such a prestigious address. The Davis family would have had a room in the basement for their living space.

Remarkably the names of Mr. Davis’ parents were also recorded. They were Mark and Necy Carpenter Davis. Also uncommon was the documentation of the women’s maiden names. Out of the thousands of death records, I have inspected associated with Bethel Burying Ground this is the only one that contains such information.

The Davis family resided at 237 S. 7th Street on the south side of Washington Square. 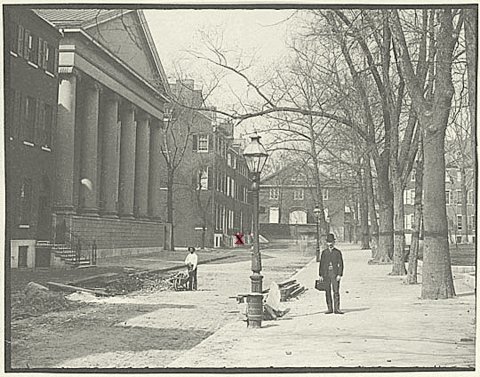 This is a photo of the south side of Washington Square taken in 1859, five years after Mr. Davis’ death. The red “X” in the background indicates where the Davis family resided.

According to Mr. Davis’ obituary, his funeral was held at this residence and then proceeded to Bethel Burying Ground. (Public Ledger, 14 June 1854)