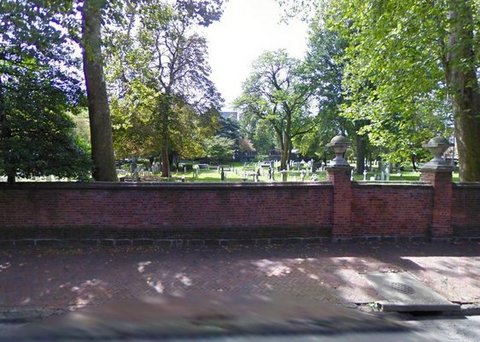 “What is now known as Weccacoe Park, in quaint old Southwark, was, a few years ago, the old burial ground of Bethel African Methodist Episcopal Church. It was back in the early years of the century when Bethel Burying Ground was first used, the property having been secured by Richard Allen, The first African Methodist Episcopal bishop. At that time, colored people after death were often treated with but little respect and it was a wish to set apart a place where his people could have the same kind of Christian burial as the white people. Just in what way he got the property is not clear. But having gained possession of that he made it over to Bethel Church, signifying that all who were unable to pay for their dead should be given sufficient ground without cost. A brick wall similar to the one that encloses old Saint Peter was built around the lot and iron gates were erected on the Queen street [sic] front (Emphasis added). As years pass the population of the little grave-yard increased and soon the ground was dotted with tombstones. Before many years, the plot was found to be entirely inadequate and sometimes five bodies were put in a single grave. This led to unfortunate results; for when in succeeding years, the rain beat down upon old Bethel Burying Ground, the water washed the bones of the dead out of the graves and the Board of Health was forced, out of regard for the health of Southwark, to interpose. It has been over 25 years now since any burials have taken place in Bethel, and after the Board of Health issued its mandate the ground was neglected and rapidly went to ruin. The idea of its purchase by the city came through a letter from a lady residing in that neighborhood addressed to the chairman of the sub-committee on small parks. The committee on municipal government indorsed [sic] a recommendation to purchase the plot, and it was in the first batch of small park ordinances passed.”      The Times Sunday (Philadelphia), April 24, 1892, p. 1.

The front gate of St. Peter’s