Twenty-year-old Elizabeth Ballard was shot and died on this date, June 11th, in 1845 and was buried at Bethel Burying Ground

Elizabeth Ballard, 20 years old, was shot in the abdomen in the early evening of Friday June 6, 1845 and died at Pennsylvania Hospital on June 11th. She was buried at Bethel Burying Ground.

ATTEMPTED MURDER AND SUICIDE – George Southard, colored, late barber, in Fifth street above Chestnut, while in a house in a court running from St. Mary street above Seventh, yesterday afternoon, between five and six o’clock, in company with a mulatto girl named Elizabeth Ballard, deliberately shot the female with a pistol, and then blew his own brains out with another. . . . Jealousy was the cause of the shocking tragedy. Southward was a man of respectability and leaves a wife, and a son nearly grown. He had exhibited evidence of partial mental derangement for some time. At the time of the occurrence, he was in a room alone with the young woman. He was dead when the room was entered. . . . (From the June 7, 1845 edition of the North American, p. 2.)

For further reading on the exploitation of Black women during this era, I recommend reading Colored Amazons by Kali N. Gross and The Afro-American Woman: Struggles and Images by Sharon Harley and Rosalyn Terborg-Penn. 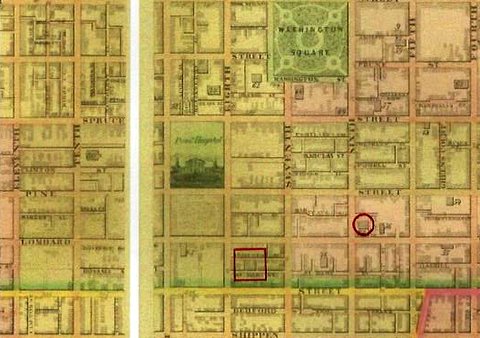