100-year-old Charles Atkins died this date, February 17th, in 1854 and is buried in Bethel Burying Ground

Mr. Charles Atkins died this date, February 17th, in 1854 and was buried in Bethel Burying Ground. He was buried on the 25th. There was no reason was given for the delay; the weather had been seasonally warm so frozen ground was not an obstacle. His cause of death was detailed as “old age.” 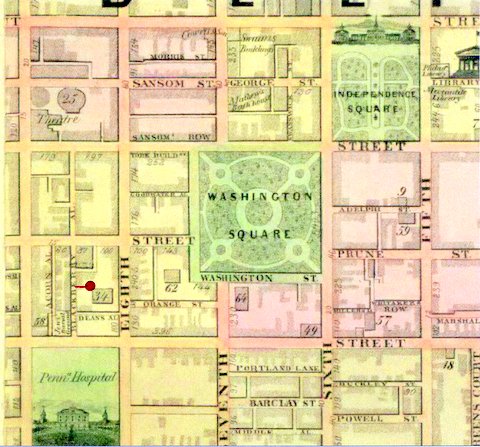 The red dot pinpoints the location of Mr. Atkins home at 28 Blackberry Alley.

Approximately 7 years earlier, when Mr. Atkins was 93 years of age, he told a census worker that he was a carpenter (” when he could get the work”) and that his spouse was employed as a domestic. Mr. Atkins was born enslaved, whereas his spouse was not. The Atkins rented a room in a “Trinity,” which was a house consisting of only one room per floor.* Below is a photo of what is a “bandbox” Trinity style house.