Three-month-old Jeremiah Davis, Jr. died on this date, January 6th, in 1849 and was buried at Bethel Burying Ground 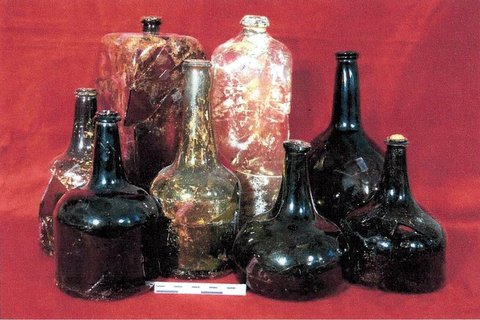 Glass bottles discovered during an archeological project in a privy very near the Davis’ home. See http://www.phillyarchaeology.net/wp-content/uploads/2012/08/Area-F.pdf

Three-month-old Jermeiah, Jr. died this date in 1849 from Hydrocephalus and is buried at Bethel Burying Ground. He was identified by the physician that signed his death certificate as being “mulatto.” The Davis family lived at #2 Taylor’s Alley (now Ionic Street) which ran east-west between Front and 2nd Streets. Jeremiah, Sr. was a waiter making $12 a month and Ms. Davis was a self-employed dressmaker.** They had been members of Old St. George’s Methodist Church before leaving with Richard Allen and Absalom Jones to worship as they pleased.*

The Taylor’s Alley in the August 9, 1832 edition of the Nation Gazette was characterized as being a long time “grievous nuisance.” There were saloons on every corner and the alley housed a notorious “dance house” with a “Ball-room” that was “one of the most notorious dens of iniquity in our city.” There always seemed to be “mobs” of young men fighting in the street and large groups of men being arrested for illegal gambling in neighboring houses. In addition, there were constant fires in the neighborhood claiming many lives.***

Hydrocephalus in the 19th century was usually due to tubercular meningitis and was marked by atrophy of the brain and convulsions. ****

Taylor’s Alley (now Ionic St.). The Davis’ front steps would have been where the red “X” is on the left.